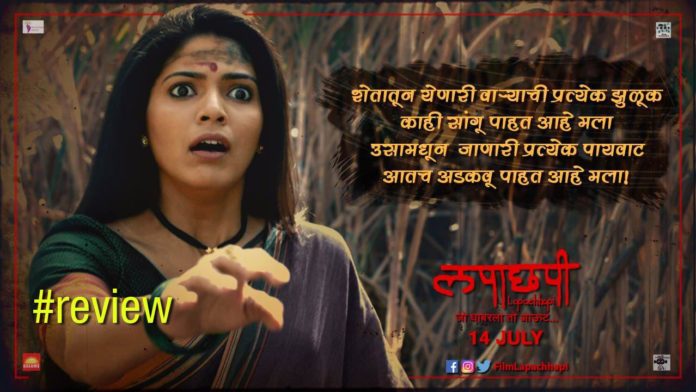 First & foremost ‘Horror’ is a genre that has been ignored in Marathi cinema since ages, especially in the recent years when the basic technical skills have improved of our films. Surprisingly our community of Marathi people have always been attracted towards horror through our folk tales & literature. There’s a decent following of writers who have been writing in this genre. So, director Vishal Furia deserves credit for attempting a Marathi horror film & getting many things right!

The story begins when a young couple Tushar & Neha (Pooja Sawant & Vikram Gaikwad) decide to take shelter at their driver’s village. Tushar had been beaten up & he wishes to protect his pregnant wife from any undesirable incident. The film doesn’t feel the need to establish or explain the ‘danger’ other than through dialogues. So, then Tushar & Neha start living in a mysterious old house for a few days surrounded by nothing but sugarcane fields!

The driver’s wife played by senior actress Usha Naik takes care of their basic needs. Then the story slowly introduces the ‘horror’ parts with irregular impact. The second half is more regular & scarier. Though the twists & turns are pretty obvious they still engross you. The film unnecessarily mixes up two conflicts, rather two issues! One that makes sense but the other loses on logic feels forcefully imbibed into the scheme of things.

This film falls in the category of “could have been much better, but still not bad!”. The most important error is a confusing plot. The film has a convenient ‘compact’ feel in terms of budget & locations but plot wise it becomes a little too ambitious. The confusion isn’t deliberate it exists because the film tries to justify everything & fails to back it up with logic. Certain films especially in horror or mystery genre deliberately flaunt a confusing plot & keep it ambiguous, but then they focus on other aspects of presenting a specific philosophy or simply mocking the existence of a well rounded plot. Lapachhapi had no such intentions in any possible way.

Then it is Pooja Sawant’s performance, there is a sense of repetition in the way she expresses or maybe it’s her limitations. She definitely tried to be better, but this role needed a more matured actress. Usha Naik’s character could have been the twist in the plot & could’ve added to the suspense of the film. Instead it becomes obvious. There are other characters which bring in more impact to the film but discussing them would be a spoiler.

The strongest aspect of ‘Lapachhapi’ is certainly its background score & sound design. This film could have lost most of what it achieves if it had a ‘scary for scary’s sake’ background. However the background can’t be called realistic. As many a times, the visuals fail to justify certain sounds & we accept that as a liberty taken on the director’s part. The most important reason why we’ve given this film ‘3 stars’ is because it achieves a mystic nature in an important sequence in the second half. The illusions are masterfully crafted & Pooja seems above average at least in them. If this film had more such sequences the result would have been different. Nevertheless this is Vishal Furia’s debut film & in the future we can expect him to improve his craft as a storyteller.

Lapachhapi definitely deserves a watch from audiences who cherish ‘horror’ genre. But we would also advice to not carry tonnes of expectations. This is without a doubt the most decent attempt at ‘horror’ in Marathi cinema’s recent history. Actually we can’t even remember a single decent Marathi ‘horror’ film made before.