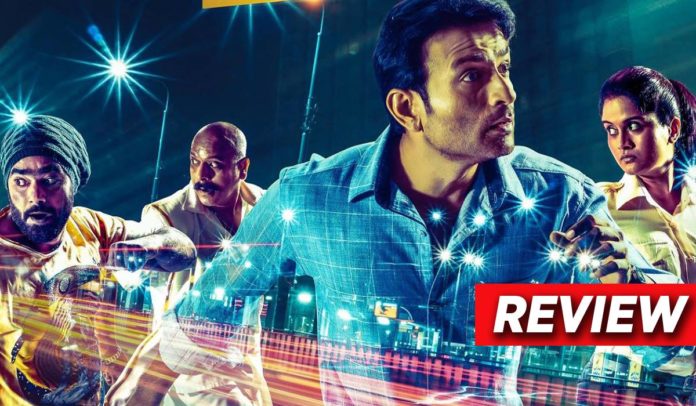 “Life is a tale told by an idiot, full of sound & fury, signifying nothing.” – William Shakespeare. I must be using this quote in my reviews for the second time! Well because again there’s another Marathi film that suits this statement perfectly. Though it’s not one bit poetic as Shakespeare had made life sound like, ‘Lagi Toh Chhagi’ is an unbearable tale full of sound & fury, signifying nothing! Having said that ‘Lagi Toh Chhagi’ is also an ambitious commercial film when analysed as a ‘Marathi’ film, but they earn no grace points for the intentions.

There’s a pointless argument heard from enthusiasts of south Indian dubbed movies that the use of editing, music & cinematography of those films is very superior to our Marathi films. In most of the cases ‘superior’ stands for over the top use of editing, music & camera angles. This overblown exploitation of the medium was also seen a few Bollywood movies when they were in that ‘south-inspired’ phase a few years ago. ‘Lagi Toh Chhagi’ does exactly that, it almost abuses the idea of non-linear story telling & cutting in between scenes. It’s so out of place & unnecessary that it keeps the audience at a safe distance from the narrative.

The confusion stays forever in the first half. By the time the film starts joining the points we as audiences are least interested in the narrative. Add to that the equally abusive use of background music that is over the top, stereotypical & outright chaotic at times. The film promoted itself on the basis that it had too many characters! These characters just don’t stop being introduced! Sometimes the same character is introduced twice, with a specific loud background sequence. Avenger: Infinity War must have had lesser characters than this!

The genre or story of the film is indescribable to be honest. It wishes to be a crime comedy of errors with an equally serious ‘suspense’ track while there are traits of a cop movie & buddy movie & god knows what else. Strangely most of the performances in the film are decent! The clear standout is the young lady cop from the narcotics department played by actress Nikita Giridhar. But in totality even her performance goes in vain. What kills ‘Lagi Toh Chhagi’ is being insanely ambitious. It’s just too much to focus on for any kind of audiences (class or mass).

Another aspect that contributes to the ‘messy’ part of the film is the use of language & giving different regional backgrounds to different characters. The film could easily be called ‘multi-lingual’. Hindi, English, Punjabi & even Gujarati, there’s room for everything! It desperately wanted to represent the new modern ‘metro’ lingual state of Maharashtra I guess, but again it makes the film even more messy & over the top. In hand of a different writer & director this setting could have resulted into a decent entertaining film, here it just becomes an unbearable mess.

If at all you wondered about the title of the film, it stands for ‘chance’. It associated the game of cricket throughout the narrative maybe just to justify the title. If you connect! It’s six, well if you not? You’re out! This film swinged it hard desperately hoping to connect, but it didn’t. However this mad unrestrained approach might benefit the makers some other day with a different film, you never know!