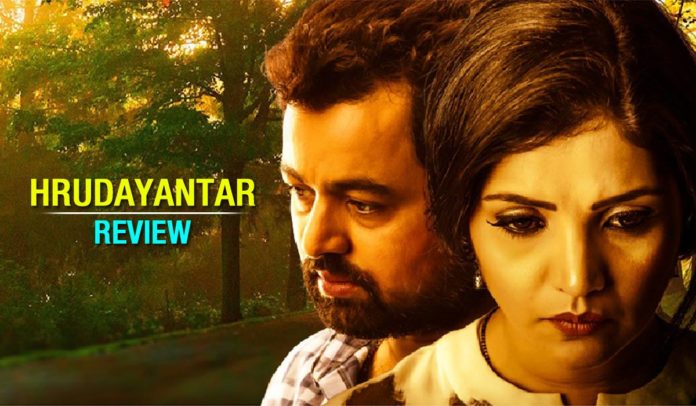 Almost five decades ago Indian Cinema got one of its most iconic masterpieces, Hrishikesh Mukherjee’s ‘Anand’. Ever since then the whole phenomenon of death in Hindi & beyond, many a times reflected resemblance to the philosophy of ‘Anand’. Most known films in that type include ‘Kal Ho Na Ho’. Though ‘Hrudayantar’ can’t be added to this list, this film is certainly benefitted by one of Anand’s essential traits. That trait doesn’t keep death as a suspense element. It’s almost certain that the concerned character will eventually die. It’s all about the little journey towards death & how one makes the most of it.

‘Hrudayantar’ is based on a family of four; Shekhar (Subodh Bhave), Samaira (Mukta Barve), Nittya (Trushnika Shinde) & Naysha (Nishtha Vaidya). Then there’s a grandmother (Meena Naik) along with Sonali Khare (a marriage counsellor) & Amit Khedekar (a doctor) who are extended family. Shekhar is an hotelier & Samaira works in the field of advertising. Now as the trailer suggests Shekhar & Samaira’s marriage is on the verge of a breakdown. In the middle of that their 10 year old daughter Nittya suffers from blood cancer.

Now the first error in ‘Hrudayantar’ is the way it mixes the two plots especially in the first half. It keeps switching between them without respecting the sensitiveness of one of its plot over the other. In one of the dialogues Samaira says that her priority right now is her child Nittya, the same was expected from the screenplay here. The second half is designed specifically to make you weep. The good thing is it might work for most of the audiences who are habituated to it. But in this critic’s opinion one major logical error makes the connection weaker.

In the first half we see the doctors talking about the treatment & Nittya’s health, even in the second half. But later the audience is taken for granted. The film doesn’t feel the need to explain why is it impossible to hope for the alternative? We never see the parents’ state of mind when they first understand that this is it. Yes in one of the scenes the little girl herself tells that & the parents break down then & there. But again that is pretty much earlier in the timeline. Post that we do see a few positive episodes that generate hope. This film keeps the hope unresolved! Then enters the ‘Anand Trait’ mentioned above.

Technically the film reflects its lavish production value. After all it is directed by a popular fashion designer from Bollywood. This lavishness also includes an interesting cameo by Hrithik Roshan. The few songs are sweet to the ears & do not disrupt the rhythm of the film. Overall Subodh gets more chances to reflect his calibre compared to Mukta. A few days back another Marathi film about one’s battle with death was released; ‘Braveheart’. That film had more power in its story but was technically weak. Comparatively ‘Hrudayantar’ is a better made film, but somewhere it could have had more emotional depth. Having said that to some ‘Hrudayantar’ is just about accurate, emotionally.

One good thing about this film is that it sells the exact same product which it advertises. Hence the audiences who loved the trailer of the film will most likely love the film too. To those who were a little sceptical about the film can still watch the film at least once. Director Vikram Phadnis displays good control over the medium in his debut films. We can definitely expect better films from him in the future in Marathi & maybe in Hindi too!

‘Hrudayantar’ is a film that reflects today’s filmmaking. It’s a well polished, heartfelt attempt whose ultimate impact differs from person to person.