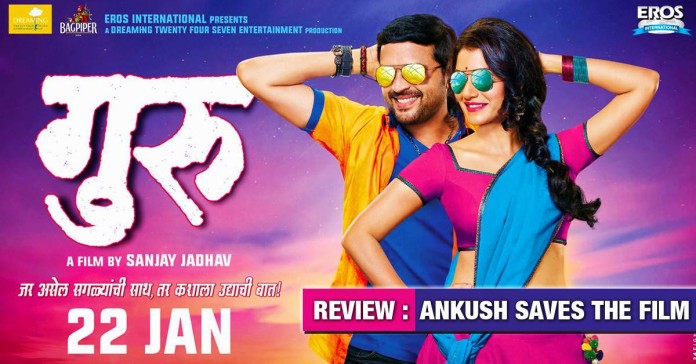 Lai Bhaari last year marked the first time a Tamil/Telugu kind of a larger than life film becoming successful in marathi cinema. It was only a matter of time that the success of Lai Bhaari would be tried to be replicated. So, here comes Guru – a film with all the essential elements of a commercial potboiler a le south style. 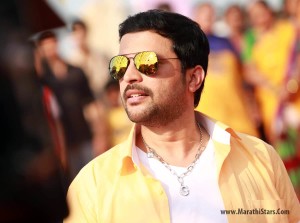 Guru (Ankush Chaudhary), is a swindler who is in the ‘business of spare parts’ in Mumbai. Once while being chased by the police he witnesses a murder and the influential people involved in the murder force him to leave to his native place where his older brother, an upright man, still resides with his family. The villagers of his native place are under the threat of being forcefully evicted to make way for a ‘Mega City’ being planned on their land. A local advocate, along with Guru’s brother, vehemently oppose this project and firmly stand in the way of it. The advocate is bumped off and Guru’s brother attacked. Needless to mention, Guru comes to the rescue of the village and his brother, and what follows is anybody’s guess. 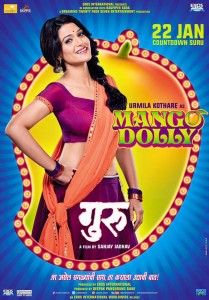 Ankush Chaudhary in the lead role is the best part about the film. He plays Guru with an undeniable charm and the role seems tailor made for him. Be it the actions scenes or the comic punches, Ankush adds his own flavor to it all. Murli Sharma as the menacing local politician hell bent grabbing the land of the villagers for the ‘mega city’ is also impressive. However, apart from these two you will be hard pressed to find anything appreciable about the film. The film might be sound on the technical side but the action scenes; the humour; the typical village belle who falls in love with the hero; all of it is so done to death that you struggle to find any originality in the film. Most of the punch lines like ‘Ghai hi vinashachi aai’ are lame and fall flat.

And what is with the ear deafening background score? My ears were buzzing with the extremely loud background score long after I was done with the screening. Many times the loud background score kills the tension that is being built in the scene. The effort to give Guru a particular garish look works, but the same cannot be said of the female lead played by Urmila Kanitkar; her make-up is so bright that it literally blinds us and we are left incapable of appreciating any other aspect of her performance.

Guru is not much different than the many South films and their Hindi remakes that we have been subjected to in the last decade or so. Ankush Chaudhary in the lead role is what makes the film watchable.