Poshter Girldwells on the Social satire. This creation is first of its kind in the Marathi industry which would swiftly pass a nice social message in a hilarious way.  The film floats in “Pargav Tekawde” a small village.  Poshter Girl flashes light over a serious issue of female feticide in a very light hearted manner.  The name of the movie is very interesting and a positive message will pass automatically from this movie and surely audience will love it. 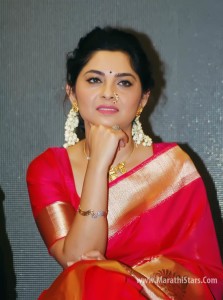 CEO of Viacom18 Motion Pictures, Ajit Andhare said, “We have done many Bollywood movies but now are vision is to explore in Marathi film industry and Poshter girl is a bold step for it.”

Poshter Girl Sonalee Kulkarni said, “I am happy being the protagonist for the film but feels proud that I’m the new face of change in Marathi film industry for women centric cinema.”

‘Poshter Girl’ trailer has got awesome response from the media and now it’s trailer is going viral on social media and viewers are going mad and it seems they are eagerly waiting for 12th February date.  Poshter Girl movie is based on the background of Pargav Tekawde a small village where the girl population is less and most of the boys of this village are unmarried.  One day one girl enters in that village and every boy is trying to get marry with her, it’s important to choose right candidate for girl, so uncle of that girl comes with the idea of ‘Swayamvar’.  What happen after the Swayamvar, we will get to know about this on 12th February 2016.