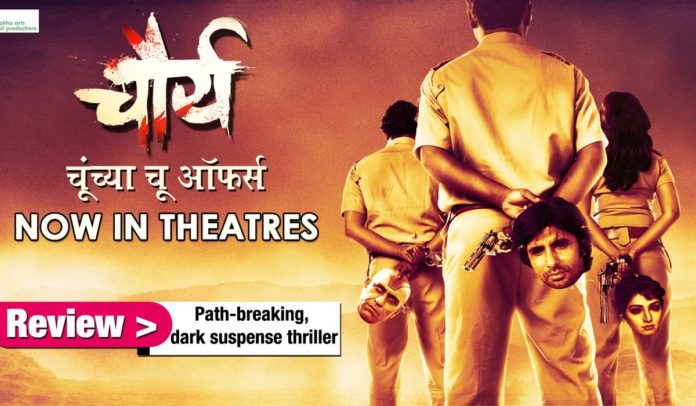 Last week, I had mentioned that things are looking brighter for Marathi cinema in the coming months after a rather poor start to the year. The strangely attractive promos of Chaurya had certainly made it one of the most anticipated films among Marathi cinema aficionados. And the film doesn’t fail those expectations. Chaurya is a commendable attempt at making a film in a style and mood that has hitherto been unseen in Marathi cinema.

It is actually the darkness in Chaurya that makes things look brighter for Marathi cinema. Caught in the rut of family dramas or adolescent love stories in the recent past, Chaurya is a welcome change for those who follow Marathi cinema. The film is set in a fictional temple town of Devmala which is clearly inspired from the real town of Shani Shingnapur. As the legend goes, the village deity punishes anyone who commits a theft in the village. The houses of Devmala don’t even have doors and windows as the villagers have faith in their God punishing any theft. But one day, on the eve of a large procession at the temple, a daring robbery is made on the massive collections of donation from the devotees.The identity of the robbers is withheld. The suspense involved is about who is behind the heist and who would finally get away with the money.

Chaurya doesn’t hold itself back at all. The number of corpses that fall in the opening robbery sequence makes you realise that whatever is in store has seldom been seen before in Marathi cinema. Shot in the background of a devotional song, the gruesome robbery sequence makes you sit up straight and take notice of the film. The sequence also has a darkly humourous directorial touch of having the gang of robbers wear masks of Bollywood stars. Later in the film, the robbers also rather hilariously refer to each other by theBollywood starswhose masks they were wearing and not their real names.

The stolen bag of money keeps changing hands, but it only causes trouble to the one who possess it. It is a trope common to heist films, but here it is rooted to the setting as it can be seen as the will of the village deity working its way on the characters. How I wish though that this wasn’t so heavily underlined and spoon fed by actually spelling it out. There is also a definite Tarantino influence over the film, especially of Reservoir Dogs. Here too we have people directly or indirectly related to the heist meeting each other, rather inadvertently, in a desolate location after the robbery. The characters don’t trust each other and tell their own versions of the robbery (Rashomon effect)which the other accomplices scoff at. Each of them willing to kill each other for the bag of money.The writer-director Sameer Asha Patil also seems to be fond of Westerns as he sets this scene in a vast expanse of a sunbaked arid land. To his credit the characters are rooted and don’t at all come across as ones who don’t belong to the setting.

Though there is certainly a feeling of Tarantinoish hangover on the film, the proceedings are taut till they relate to the robbery and the suspense involved about who will finally get away with money or will anyone at all? The camerawork involves a lot of close-ups of characters to get across the nastiness in their eyes. Milind Shinde as the suspended police officer made to keep a tab on the heist gives the most impressive performance. I flinched at the scene where Milind Shinde playfully presses on the wound of one of the accomplice to make him talk.  Chaurya is one of a kind with respect to Marathi cinema in what it achieves in these portions of the film. There are indeed quite a few rough edges here, but then given that it is the debut film of the director, they can be overlooked.

But what can’t be overlooked are the last portions of the film. It comes across as the director is trying a little too hard to give the film some more depth and not just keep it as a suspense thriller. Here, Chaurya enters Deool territory of commercialization of God and these scenes really test your patience. This stretching of the film dilutes the thrill generated by the earlier parts. Also, showing a character played by Kishore Kadam as the narrator of the film comes across as an intrusion of sorts as it isn’t properly integrated into the whole framework of the film.

P.S.: The producers need to be given special kudos for releasing the film in a format that allows even the deaf and the blind to enjoy the experience of a movie. It is certainly a novel initiative that needs to be replicated by others as well.

Chaurya is a brave attempt to make a dark suspense thriller in a style seldom seen in Marathi films. Though not spotless, it is definitely an effort deserving patronage.