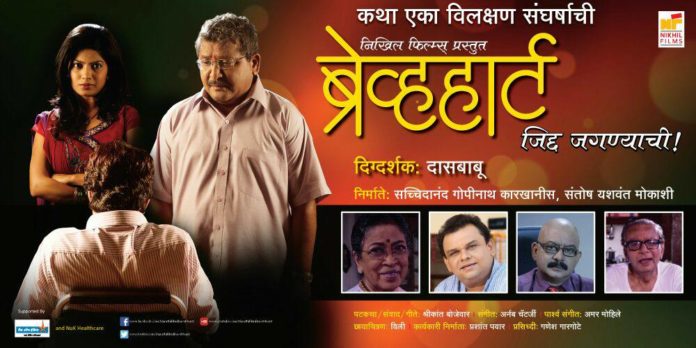 Braveheart is a film that’s not technically or logically flawless, but manages to strike the most essential chord, the ‘emotional’ one. 2017 hasn’t been a great year for Marathi cinema so far & Braveheart is one of those few films that the audiences should definitely give a try.

The film is based on a true story. A young man named Nikhil Karkhanis (Sangram Samel) suffers from a deadly disease of the spinal cord, with no possibilities of surviving. The scene in which the doctor reveals this sad truth to him & in his father Sacchidanand Karkhanis (Arun Nalawade) is where the film starts rising above average. Nikhil’s first reaction to this is not just shocking but extremely uplifting. He asks the doctor how many months, years he has with him. Nikhil is passionate about many little things in life from trekking, traveling to food & he wishes to complete as many dreams as he can in whatever time he has left.

However the narrative of the film reflects more on his struggle with the deadly disease that works like slow poison, affecting his legs first making them useless & slowly the entire body. Throughout this struggle there are two faithful helping hands to Nikhil, one being the company he works for ‘Tech Mahindra’ & the other & the most important his father Mr. Sacchidanand Karkhanis. Nikhil grew up under the love of his father & grandmother (Sulabha Deshpande) as his mother too died from a disease when he was 12-13 years old.

Apart from this really inspiring real struggle of Nikhil, the strongest points of this film include the performances by the two lead actors Sangram Samel & Arun Nalawade. Sangram, the debutant has truly poured his heart into the performance. Both physically & emotionally he lives Nikhil’s character. Arun Nalawade is an actor who has a tendency to go over the top, but when he doesn’t he has a great gift to make his characters human! And he did make Mr. Sacchidanand Karkhanis very much human.

Talking about flaws, ‘Braveheart’ could have avoided a clichéd approach to the character of Nikhil’s love interest played by Dhanashri Kadgaonkar. A girl who is madly in love with Nikhil & wishes to marry him disregarding his disease. But after the marriage, she changes drastically without any solid reason. She was married to Nikhil for almost four years, if they wanted the character to change so drastically they could’ve shown the transition slowly & without directly making her a vamp.

‘Tech Mahindra’ as I said earlier is an important helping hand to Nikhil, but unfortunately we never really witness Nikhil’s office routine or the reason why he is so important to the company. Another major flaw is the ever-present narrator (Atul Parchure) who contributes nothing substantial to the narrative.

Many a times some important incidents in Nikhil’s journey are simply narrated by the narrator, which should’ve been shown to the audience. Obviously there are financial constraints that could’ve made the director take these decisions.

This film is written by the ‘Ek Hazarachi Note’ fame writer ‘Shrikant Bojewar’ & his dialogues are very much important for making the emotional connect. Another refreshing aspect is the background score given by Amar Mohile. Yes it’s melodramatic but still displays a lot of craftsmanship & an intent to contribute to the film’s emotional context.

This film being produced by the actual Mr. Sachhidanand Karkhanis (real Nikhil’s father) avoids any unnecessary “commercial”, “masala” sorts of additions. Directed by a non-Marathi director Dasbabu, ‘Braveheart’ is a film that could’ve been even better if it had a bigger budget & more work on the screenplay, but nevertheless this story of a real life ‘Braveheart’ & his equally brave father manages to inspire us positively & value our lives more.

If you love inspiring real life stories, ‘Braveheart’ is a must watch, for others too ‘Braveheart’ can surprise you emotionally!