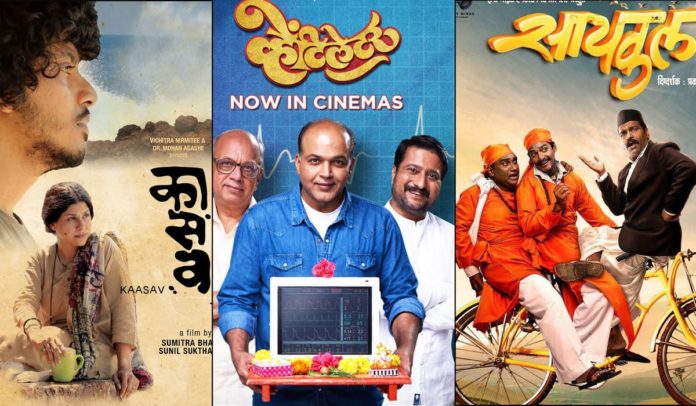 Marathi cinema might be going through a rough patch commercially right now, but the announcement of 64th National Film Awards has honored Marathi cinema like never before. Never before did Marathi films win so many awards in one year! Here’s the list of all the awards Marathi Cinema bagged this year:

In total 8 awards have been bagged by Marathi cinema with Priyanka Chopra produced ‘Ventilator’ & yet unreleased ‘Dashkriya’ bagging the most ‘3 awards’. The most prestigious award among all categories is the ‘Golden Lotus Award’ that is awarded to the best film & Sumitra Bhave – Sunil Sukthankar’s ‘Kaasav’ has bagged it! This is certainly a proud moment for Marathi Cinema.

‘Kaasav’ has now become the 5th Marathi film to win this most prestigious ‘Golden Lotus Award’ or the ‘Suvarnakamal’. Previously Marathi films Shyamchi Aai, Shwas, Deool & Court have been honored with this award.

We congratulate all the award winners & hope that every year our Marathi Cinema will keep bagging many awards at the National level!