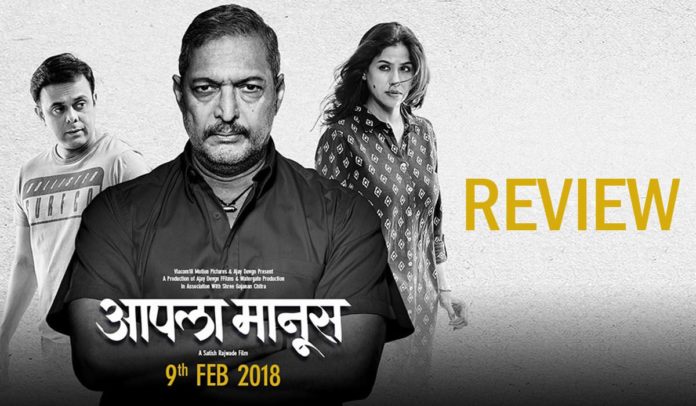 One of the most essential qualities of theatre is the freedom of being a set up; a game and henceforth called a ‘play’. The characters are participants in a game & not necessarily as completely relatable humans. So many a times a game has its own set of rules which shouldn’t be thought of in a literal sense by the audiences. Vivek Bele the writer of ‘Aapla Manus’ has created such a game in the original play ‘Katkon Trikon’ (from which this film is adapted) & also in ‘Aapla Manus’. Nana Patekar’s Inspector Maruti Nagargoje is one such ‘game’ defining character who shouldn’t be analysed in the literal logical sense. His conflicts, interests & purpose are all artificially created to serve a bigger purpose in the story & the things the film wishes to say.

Nana Patekar plays a double role in the film, one that is revealed from the very beginning (& hence not a spoiler!). An exact opposite of Inspector Nagargoje; in terms of the social-economical background, this character of an old man is the subject of the ‘game’ while Nagargoje is the most important player of the game. Now Nana Patekar has smoothly gone under the skin of Inspector Nagargoje; a character he literally owns throughout! But the other character which also has a lot of screen time doesn’t go well with Nana. Imagine Dr. Shreeram Lagoo playing A.K. Hangal but more animated & hysterical. However after some time we get used to Nana’s antics here, also because we never see him constantly in that character. As any regular murder mystery drama that explores different perspectives of the same incident in bits & parts we keep meeting the old Nana alternately.

Both Irawati Harshe & Sumeet Raghavan are perfectly casted in their parts & they match (& sometimes even overshadow) Nana throughout. Especially Irawati Harshe who plays an extremely delicate character which could’ve easily been a stereotype, but she makes her human. A modern day woman who doesn’t believe that confronting your elders is a sin. A maths teacher by profession & a Mathematics gold medal winner in her past who brings her theory of ‘Katkon Trikon’ (Right Angled Triangle) as an analogy to explain the relations between her, her husband & her father-in-law. The play was titled ‘Katkon Trikon’ based on this very theory, however ‘Aapla Manus’ is a more suitable title of the film as it represents the larger film defining theory or philosophy.

Nana’s Nagargoje does something really important throughout the tensed, serious & dramatic moments in the film. His tongue-in-cheek humour keeps lightening up the film throughout. In parts such as these the film’s dialogues are sharp & effective but some other times they are really bland. However the second half gets our complete attention & we don’t really notice the dialogues. We are too much in the narrative of the film. The narrative keeps playing with our emotions like an orchestra master who keeps controlling the instrument players constantly.

‘Aapla Manus’ ends on a morally important note, that might appear preachy to some. But after what we’ve gone through it makes complete sense. Yes there are logical flaws at a few instances if one tries to analyse the incidents, behaviours in a literal-logical way. But if one perceives this as a ‘game’ that was played for a purpose, both the ‘game’ & the purpose makes a powerful emotional connect. However the omnipresent flaws in every Satish Rajwade directorial are present here too. Whether it’s serial like blocking, framing, the make-up of artists & the production design all of it. But somehow they don’t pollute the film mainly because this film belongs more to the writer, & the actors than the director.

‘Aapla Manus’ is perfect family entertainment that will hold the audiences throughout & would emotionally satisfy them, extending the feeling for hours after watching the film.