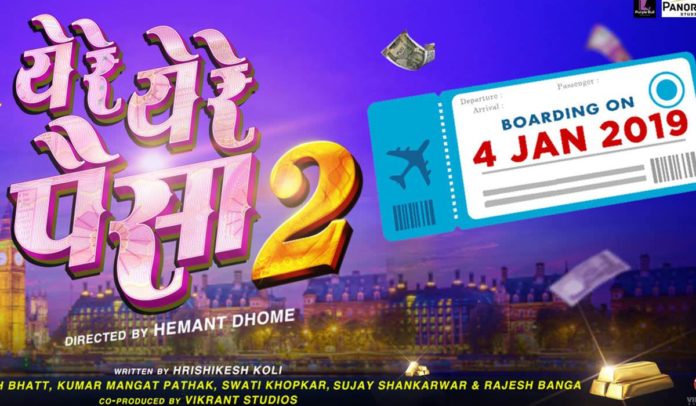 After the success of the ‘Ye Re Ye Re Paisa’ earlier in Jan 2018 the audiences demanded a sequel from the makers! And the wishes of all the audiences who loved the film have come true! While the production team of the film is same, now it has a different creative team. The sequel will be directed by ‘Baghtos Kay Mujra Kar’ fame actor-turned-director Hemant Dhome.

Moreover, the film is written by a new writer this time. Hrishikesh Koli who previously wrote the dialogues for the surprise hit of 2017 ‘Boyz’ is on board. ‘Ye Re Ye Re Paisa 2’ is a joint venture by Amey Vinod Khopkar Entertainment, Purple Bull Entertainment, Trance Fx Studios Pvt. Ltd & Panorama Studios.

The release date of the film too is out, it is 4th Jan 2019! From the teaser poster of the film, one could make out that the film is set in a foreign backdrop maybe in London! It’s exciting times for Marathi cinema for sure as a ‘franchise’ has been created in a ‘heist’ film genre which is not traditionally common in Marathi cinema.