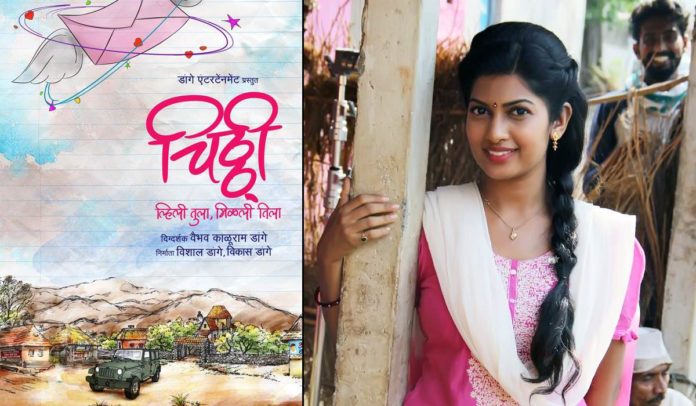 Actress Dhanashri Kadgaokar has garnered appreciation for many of her roles on the small screen especially the current superhit serial ‘Tujhyat Jiv Rangla’. Now soon in January 2018 she will be seen playing a lead role in the Marathi film “Chitthi”. Recently the teaser poster was launched on social media.

Vishal Dange has produced this film & is also presenting under the banner ‘Dange Entertainment’. Vaibhav Kaluram Dange is the director of the film whereas Swarada Burse & Sujay Jadhav have written the film. Along with Dhanashri Kadgaokar the film stars debutant actor Shubhankar Ekbote. A young guy writes a letter to his lover but that letter never reaches her instead many fun things happen, is the basic plot of the film.

Dhanashri says her character in this film is very ‘girl next door’ type. The writer of this film Swarada Burse suggested her name for the film & later after auditioning for the film she got the role. She also said that she learned a lot from different senior actors who are also a part of this film. The film also star many little child artists & Dhanashri truly enjoyed working with them & she believes the audiences too will enjoy watching them in the film.