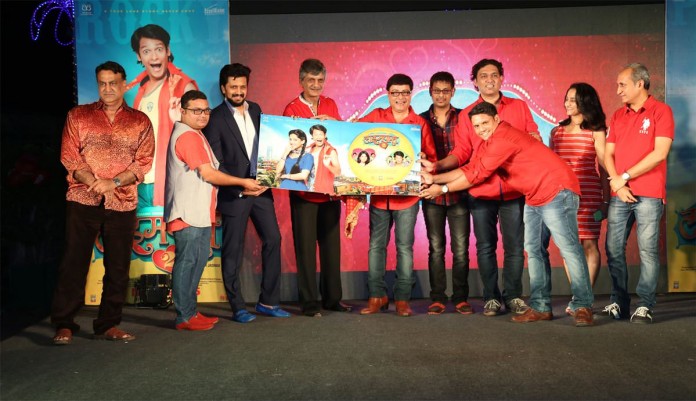 Timepass created history in Marathi cinema with its teenage romance story, punchy dialogues and sweet music. As love story in TP was left incomplete, audience was awaiting for its return. Timepass2 is a sequel to this first love-story. The characters are grownup and does not know whereabouts of each other. The makers of this film are leaving no stone turned for promotions. So when trailers were launched on social media amidst fanfare, music launch happened in a glittering star-studded event. Bollywood actor Riteish Deshmukh and legendary actor and film maker Sachin unveiled music for TP2.

Riteish said he is just waiting to see this film. “I am curious about TP2, since I have seen its trailer. I sincerely hope that audience like this film”

“Praju” is sung by Mahalaxmi Iyer and Rishikesh Kamerkar. Madan Pichkari, an unusual number is voiced by Bollywood rapper Ishq Bector and Apeksha Dandekar. Tu Mila is sweet romantic song by Shalmali Kholgade and Nikhil D’souza. Dagdu Saavdhan is an another music masti by Rishikesh Kamerkar, Chinar Kharkar and Vivek Naik. This song is penned by Kshitij Patwardhan. “Sunya Sunya” is sung by Adarsh Shinde and Ketki Mategaonkar. Anand Shinde has given his voice for dance item “hee poli sajuk lelechee”
.
The film stars Priyadarshan Jadhav and Priya Bapat as Dagdu and Praju. Story and direction is by Ravi Jadhav. Screenplay is written by Priyadarshan Jadhav and Kshitij Patwardhan. The director of photography is Vasudev Rane and Choreography by Umesh Jadhav. The film releases on 1 May all over Maharashtra.