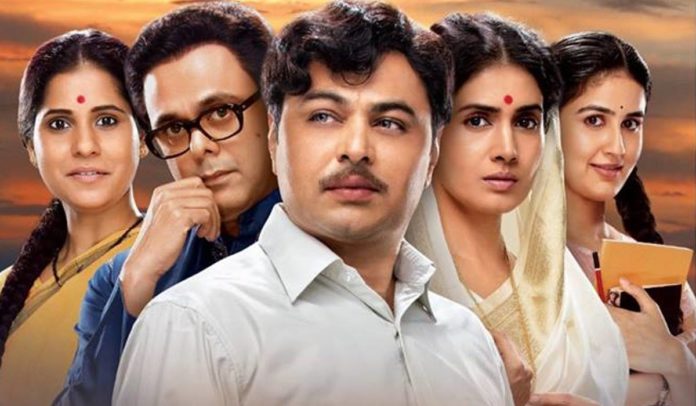 This Diwali Marathi cinema has a bumper release, the much awaited ‘Ani..Dr. Kashinath Ghanekar’ biopic of Marathi theatre’s first superstar starring the current Marathi star Subodh Bhave as Dr. Ghanekar. Moreover the film also features many renowned actor portraying roles of legends from that golden period of Marathi theatre. We are sure that you have already made your plans to watch this film in theatres, yet if you are in two minds we give you top 7 reasons to not miss ‘Ani..Dr. Kashinath Ghanekar’ in theatres!

With Subodh Bhave in the lead as Dr. Kashinath Ghanekar, this marks his third biopic after ‘Bal Gandharva’ & ‘Lokmanya – Ek Yugpurush’! The audiences associate a certain sense of trust with the name of Subodh Bhave & this film is no different! Along with him the film has a very strong cast which includes Prasad Oak as ‘Prabhakar Panshikar’, Sumeet Raghavan as ‘Dr. Shriram Lagoo’, Sonali Kulkarni as ‘Sulochna Tai’, Anand Ingle as ‘Vasant Kanetkar’ & Mohan Joshi as ‘Bhalji Pendharkar’ among others!

Dr. Kashinath Ghanekar was supremely talented yet he had a very unpredictable & volatile personality which is also evident from the trailer & teasers of the film! His most successful roles had a sense of aggression in them, whether it was of Sambhaji Raje or of ‘Lalya’ from the play ‘Ashrunchi Jhali Phule’! He was also suffering from alcoholism in a phase of his life. Such unpredictable personality makes for exciting material for a biopic!

Dr. Kashinath Ghanekar was already married to a doctor even before he entered the Marathi theatre fraternity. But later in his life he fell in love with a much younger woman than him! Who was that woman? And what was her equation with the star? What was it about her that inspired the star so much? All of that can be known after watching the film!

Writer-director Abhijeet Deshpande has clearly specified from the very beginning that this film won’t be glorifying Dr. Ghanekar. It believes in honest depiction of his life. The director believes that the audiences relate to a person who is flawed. A flawed personality makes that character more human beyond the glorious image that a star has in the limelight! So we can say that the film is interested in the human side of the star!

Vaidehi Parshurami plays a very significant role in the film, a much younger girl than Dr. Ghanekar who falls in love with him & is also a huge fan of him. The character is essential in the perspective that has been used in the film, as the film is based on the book written by this very person! Vaidehi Parshurami previously seen in few films promises to be the surprise package of ‘Ani..Dr. Kashinath Ghanekar’!

Earlier in the year ‘Viacom’ has gifted the Marathi audiences with ‘Aapla Manus’ & ‘Cycle’. Now they are all set with a grand Diwali gift in the form of ‘Ani..Dr. Kashinath Ghanekar’. The production house has earned great amount of credibility in very less time. It also promises a grand release for the film so that audiences from all corners can enjoy this film in theatres this Diwali!