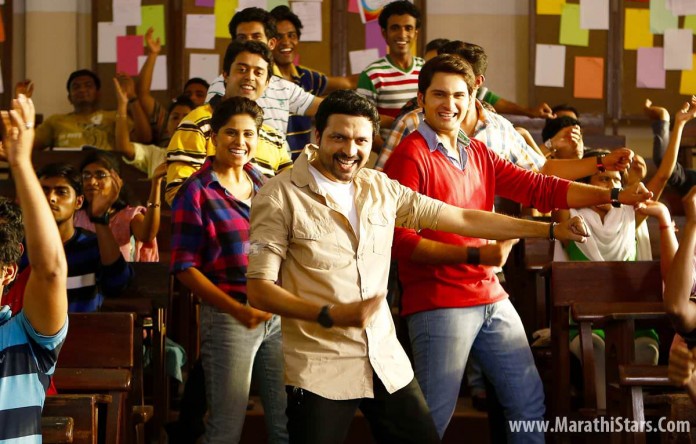 1. The Film stars Ankush Choudhary and Sai Tamhankar in lead roles. Ankush being the most handsome hero in Marathi films and Sai in a dashing action avatar has escalated audience expectations for this film. The duo already had a hit Duniyadari under their kitty. It will be curious to see what these two stars will bring on the screen with Classmates. The trailor of the film showcases these stars in a completely different avatar. The film also stars Sachit Patil, Sonalee Kulkarni, Sushant Shelar, Siddharth Chandekar, Suyash Tilak and Pallavi Patil adding to the star quotient of the film.

2. The film revolves around a group of students studying in TYBA in 1995. Packed with the spirit of youth, this film is homage to the best years of our lives. Insane fun, eternal friendships, blossoming romance, changing loyalties, life shaping decisions. All happens in those few years of college. It will be a walk down the memory lane for the audience as the film promises all that fun and nostalgia of college years.

3. College days means those romantic dreamy days. Classmates bring all that cute, sweet romance in Swapna Chaalun aale, a song by Sonu Nigam. The love-song is filled with the innocence and all that romantic feelings about that special person.

4. For any hit film, the songs play vital role. The songs of the film “Teri Meri Yaariyan” and “Bindhast Bedhadak” are already chart-toppers. The music by Amit Raj is catching up with the current generation. “Aala Re Raja” is also becoming anthem for the college youth nowadays.

5. The plot of the film promises a power-packed entertainment. The film is a remake of a Malayalam film of the same name. This film released in 2006 has been a trend-setter in Kerala film industry. The same film has been made in Tamil and Telugu languages as well. All these versions have been blockbusters.