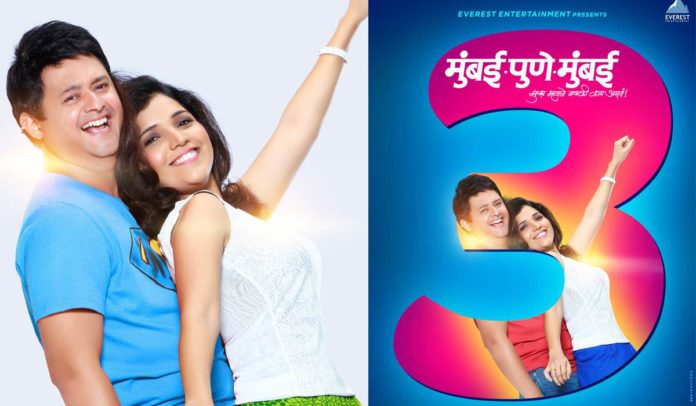 Few years back when ‘Mumbai-Pune-Mumbai’ (2010) first released no one knew it would become such a huge hit & would become a part of our culture. Swwapnil Joshi & Mukta Barve’s pair became the icons of new age romance in Marathi. In 2015 the sequel, ‘Mumbai-Pune-Mumbai 2’ continued the greatness of the first & established itself as the most successful film series in Marathi.

And now the battle of Mumbai vs Pune is all set to have another film! Yes a complete trilogy. The poster of the film was recently revealed by Swwapnil Joshi through his official social media handles. The film has the tagline from the popular Prashant Damle song, ‘Sukh Mhanje Nakki Kay Asta’. Just like the first two films the third will also be directed by Satish Rajwade.

The sequel ‘Mumbai Pune Mumbai-2’ was released during Diwali on November 2 two years ago. Not only in Maharashtra, but the film goers even in other states like Goa, Gujarat, Karnataka and even in US received overwhelming Response. The film was screened in San Francisco, Houston, Los Angeles, Detroit, Salt Lake City among other others.

Director Satish Rajwade said, “We did not expect Mumbai Pune Mumbai to be successful to such an extent. Mumbai Pune Mumbai (MPM) as now became a cult, seating a trend of one of its kind love story. MPM has become a habit with the audience. People are now more curious about the lives of Gautam and Gauri. And related themselves with the happenings in the lives of the couple.

‘Mumbai-Pune-Mumbai 3’ is being produced by Sanjay Chhabria while the associate producer is Amit Bhanushali. The release date announced as of now is 27th April 2018.