Quite a few period films have been made in Marathi in recent times & they have been loved by the audiences too. Many great personalities have been a subject of these films. There’s a new addition to this list now. Kondaji Fajendra was a brave warrior in the history of Maratha empire. He fought for the great Shivaji Maharaj against the enemies on those very forts! This forgotten hero’s bravery will be shown in upcoming Marathi film ‘Farzand’.

Kondaji Fajendra alongside other brave Mavalas won the Panhala Fort for the Maratha empire! Director Digpal Lanjekar is set to show this brave journey through ‘Farzand’ film. In this way we could relive the history again. The first teaser poster of this film was unveiled by the great historian Shivshahir Babasaheb Purandare. Babasaheb believes such biopics about brave warriors inspire the whole state to do brave things. He also felt that this film could attract many youngsters towards our great history. 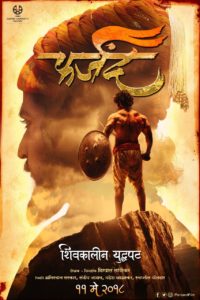 ‘Swami Samarth Movies’ presents ‘Fajendra’ is produced by Anirban Sarkar, Sandip Jadhav, Mahesh Jaurkar & Swapnil Potdar & is set to release all over Maharashtra on 11th May 2018!