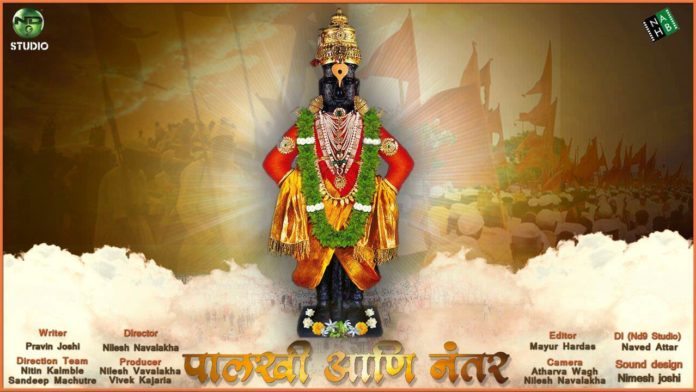 The 700 year old tradition of walking down to Pandharpur on Ashadhi and Ekadashi is one of the most prominent cultural event in Maharashtra. Lakhs of Devotees of Lord Vithal keep their date with the pilgrimage. But, despite many Government schemes and initiatives there is a major issue of cleanliness. Even after the government building toilets the ‘warkaris’ defecate in the open. There is obviously a lack of awareness regarding the vulnerability of unhygienic conditions among the warkaris. Nilesh Navalakha, who has produced films like Fandry and Shala, has directed a short film titled Palkhi Ani Nantar that tries to bring into focus this issue during the pilgrimage.

Former MLA Pradeep Rawat under the aegis of Seva Sahyog Production had taken an initiative to create awareness about the uncleanliness on the path taken by the pilgrims of the Wari. Last year they had adopted two villages and had donated two mobile toilets and it got a very good response. Taking inspiration from this the social cleanliness message has been communicated to the Warkari pantheon and the society in general and that’s the reason why this short film has been made.

The director Nilesh Navlakha said about the film, “ Last year in Pandharpur , the Government along with a few private institutions had built 500 toilets but still many warkaris defecate on open spaces and as the warkaris go every year on a pilgrimage every year this has become a regular feature but a new way to stop this should be found. The Government is initiating Nirmal Wari like facilities. But the warkaris must take it upon them to use the facilities provided and make a clean wari . Only then this problem can be solved. They must realize that a lot of dangerous diseases spread because of uncleanliness.  Therefore this film has been made to make people aware that the wari is not only because of their devotion to Lord Vitthal but also cleanliness which is an anti-thesis which the society must know. The film implores warkaris to use toilets and make all the roads clean”

Palkhi Ani Nantar has been edited by Mayur Hardas and the DOP of the film is Atharva Wagh. Anveya Bendre has given the voice over for the film.

The short film with an important message will be released on various platforms and most importantly over the internet. Social media will be extensively used to help the film reach maximum people.