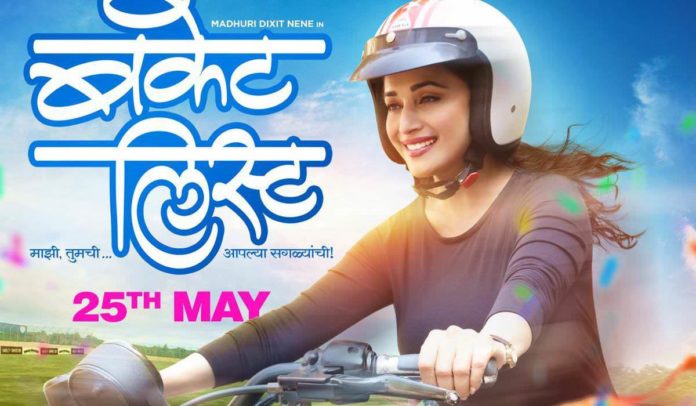 Recently during the shoot of a song from upcoming Marathi film ‘Bucket List’ in Pune, the Punekars got the chance to watch their favourite actress live in action. Madhuri plays a middle-aged housewife in ‘Bucket List’. However, her character will be seen riding a super-bike in this song! What is the mystery behind it? It will only be revealed once the film is out.

Moreover, this was Madhuri’s very first time riding a superbike for a film, that too in her very first Marathi film. On this occasion, Madhuri also talked about her childhood memories of visiting Pune with her siblings. She said she had a lot of fun then & also saw all important historical monuments & places in Pune.

Madhuri will be seen playing a Punekar in ‘Bucket List’. She also says that she has inhibited the typical Puneri language & style of speaking for this role. Blue Mustang Creations, Dark Horse Cinema & DAR Motion Pictures produced ‘Bucket List’ is directed by Tejas Prabha Vijay Deoskar & it will soon be releasing in theatres.