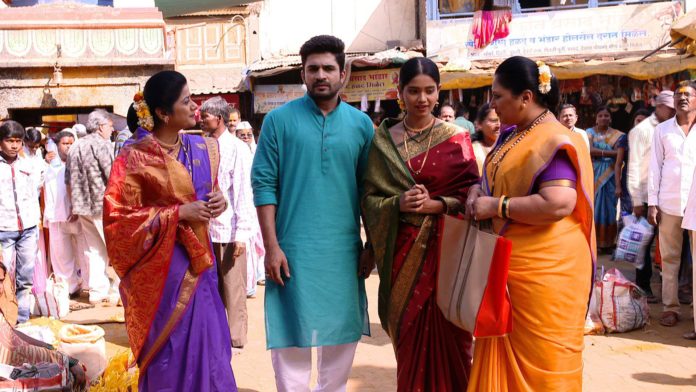 ‘Ghadge & Sun’ is one of the most popular serials right now on Marathi Television. Currently there’s spiritual atmosphere in Ghadge’e family. Mai has decided to visit Jejuri as Akshay was saved from the accident safely & also to strengthen the husband-wife relation between Akshay & Amruta. According to the tradition of Ghadge family newly-wed couples have to visit the Khandoba temple together.

But ever since Akshay & Amruta’s wedding many obstacles had disrupted the traditional proceedings. But now the entire Ghadge family are on their way to Jejuri! According to this tradition the husband has to walk the steps of the temple by picking up his wife. So this is mentally difficult for Akshay whereas Amruta looks at it as a new start of their relationship.

Along with the ‘Khandoba’ Darshan the rituals of ‘Jagran-Gondhal’ will also be completed in Jejuri. Will Akshay pick up Amruta & complete the ritual? Will Lord Khandoba’s blessing cause Akshay & Amruta’s relationship to blossom? To know answers to these question tune in to Colors Marathi from 12th February to 18th February at 8:30 pm for Ghadege & Sun’s ‘Jejuri’ special week!