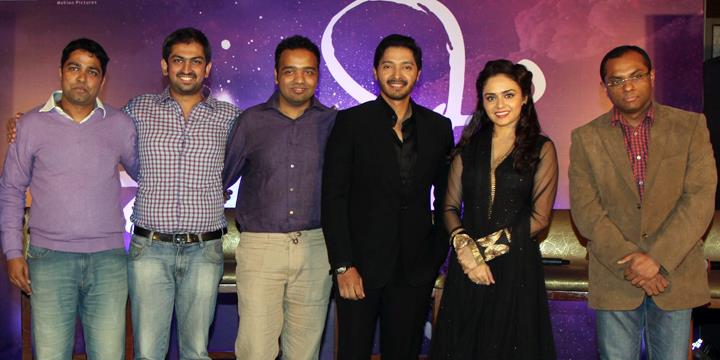 Having delivered hits such as Lalbaug Parel, Haunted 3D, The Lunchbox and D-Day, DAR Motion Pictures today announced that it had joined hands with IME Motion Pictures – the acclaimed makers of celebrated films like Pitruroon, Chintoo and Pune 52, Blue Drop Films, and Virtue Entertainment for Marathi’s first Superhero Film ‘Baji’. To be directed by Nikhil Mahajan of Pune 52 fame, the film will star Shreyas Talpade, who will be returning to Marathi cinema after a span of seven years, as Baji, while his leading lady in the film would be the popular Marathi actress Amruta Khanvilkar.

The announcement was made at a special function at the marquee Hotel Four Seasons hotel in Worli Mumbai that was attended by the Producers Vivek Rangachari – DAR Motion Pictures, Amit Ahirrao – Virtue Entertainment, Suhrud Godbole – IME Motion Pictures, Nikhil Mahajan – Blue Drop, select Cast and Crew of the film, media and key industry figureheads. The event also marked the unveiling of the first teaser poster of the movie along with the ceremonial lighting of the lamp by real life superhero Additional Commissioner of Police Mr. Vishwas Nangre-Patil along with the producers of the movie.

To be shot across picturesque Konkan locales, Baji is an action-adventure-romance laced superhero vigilante film that transcends both folklore and present day. It is based on the legend of a man who took upon himself to protect the common man against oppression and injustice. His sword, his bow-arrow and his white stallion live on to define him.

Speaking at the occasion writer-director of the film Nikhil Mahajan, said: “Baji was just too tempting a script to not make. Further the dream just got better with not just DAR and IME spearheading the project but even Shreyas Talpade agreeing to essay the role of Baji. Given his stature in the industry and the fact that this would be his first Marathi film after seven years is a huge positive that significantly add to this really ambitious project. The combination of content driven production houses like DAR, IME and Virtue, Shreyas, Amruta, a great script, and an envious A-Lister crew that we have got together for this film will most definitely ensure a superb entertainer for the audiences and critics alike.”

A rather elated Actor/Producer, Shreyas Talpade said, “I owe my entry into films to Marathi cinema and theatre and have always been on the constant lookout for an excellent script that would excite me as an actor. Baji not only had its attraction as Marathi’s first superhero film but was backed by a really outstanding and challenging script laced with folklore, action and romance, an emotional connect. It was a clear go ahead for me right from day Nikhil Mahajan narrated the script to me and with DAR and IME helming the project, I am confident that this would definitely go on to become one of the biggest success stories in the film industry.”

The movie is slated for a Winter 2014 release.