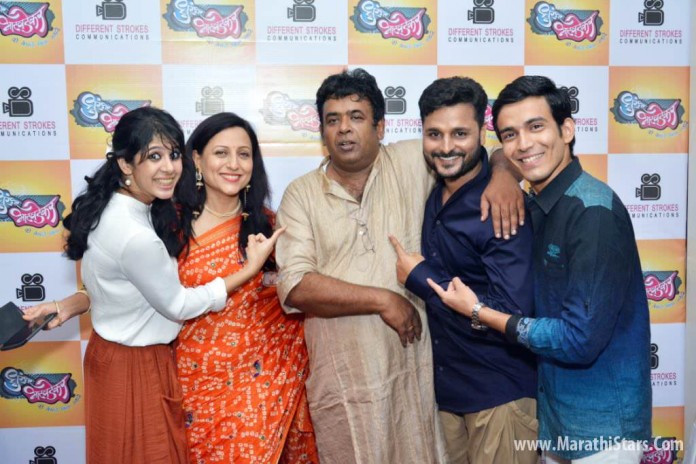 Director Kshitij Zarapkar who gave us ‘Golaberij’, based on P.L.Deshpande’s stories, is now ready with his next film ‘Dhurandhar Bhatawdekar’ which is also a comedy flick. Kshitij has himself written the script of this film, which stars two veteran actors, namely Mohan Joshi and Dr.Mohan Agashe playing two most important characters of Mr. Avinash Durandhar and Mr. Vishwambhar Bhatavdekar respectively. The film revolves around these two oldies, who have come to stay at a five star Home for senior citizens efficiently managed by Pushpa Damle (Kishori Shahane), who lives there with her 22 year old daughter Ranee (Tanvi Hegde). Though this posh place houses enthusiastic senior citizens who are very young at heart, it also has a Gym trainer, who runs the health club, a resident doctor, a cafeteria and a well equipped library.

The first look of this film was unveiled in presence of important artistes of this film and media persons. Vijay Kadam who was dressed up as a Police Inspector presented a skit. Kishori Shahane was celebrating the day with her 75th film and director Kshitij Zarapkar came dressed up in traditional Maharashtrian attire. Later, the other star cast of the film, comprising of Dr.Mohan Agashe, Mohan Joshi, Shantanu Gangane, former child actress actress, Tanvi Hegde, Jayant Savarkar, Vrushali Hatalkar and Dushyant Wagh also joined them, followed by the arrival of Producer Devdatt Kapadia, lyricist Ashwini Shende and music director and singer, Rishikesh Kamerkar, who also rendered a fun filled song.

Director Kshitij, while speaking on the occasion, assured wholesome entertainment through this film, which will release on 29 May 2015. The first look and promo of this film was appealing, giving a clear indication that it was a film for all age groups.