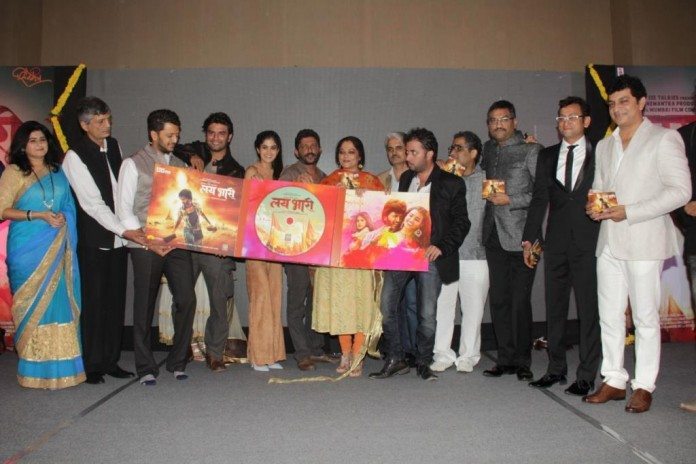 RiteishDeshmukh’s first movie Lai Bhaari is already a talk of the town- not only because it is a mega budget movie but also because of its interesting promotions. The first look and the music of this Nishikant Kamat directed movie was unveiled at a glittering function held in Mumbai by Raj Thackeray and his wife Sharmila. Entire cast and crew of this movie was present for this event. The film will be released on 11 July.

After creating an impression in Bollywood, Riteish ventured successfully into Marathi film Industry as a producer. Now for the first time, he will be seen as dashing Marathi boy in his first Marathi film. The film has been directed by NishikantKamat, who has already delivered blockbusters like Mumbai Meri Jaan, Dombivali Fast and Force. Various actors like Tanvi Azmi, Radhika Apte, Uday Tikekar, Sharad Kelkar, Sanjay Khapre and Aditi Pohankar will be seen in this film.

The movie is presented by Zee Talkies and produced by Cinemantra Production and Mumbai Film Company. Jitendra Thackeray, Amey Khopkar and Genelia Deshmukh are the producers. The story of Lai Bhaari has been written by eminent Bollywood producer Sajid Nadiadwala, Screenplay by Ritesh Shaha and dialogues by Sanjay Pawar. Ajay-Atul has given music along with some lyrics and ither songs are written by Guru Thakur. Other crew includes Cinemetogrphy by Sanjay Memane, Editing by Arif Shekh and choreography by Ganesh Acharya and Raju Khan.