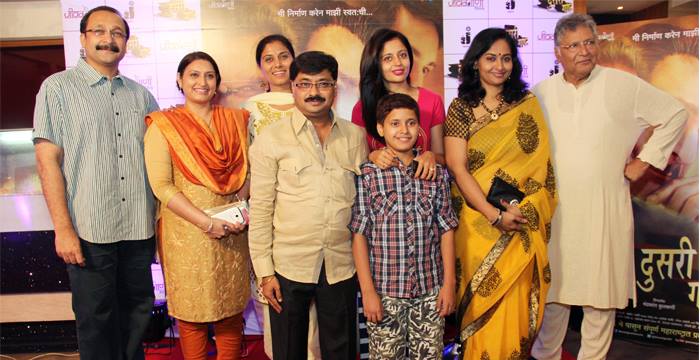 Known for quality Marathi films, the trio – Chandrakant Kulkarni, Ajit Dalvi and Prashant Dalvi, is all set to hit the silver screen once again. Dusari Goshta, their second film based on the political graph after blockbluster Aajacha Divas Majha, is ready for release in 172 theaters across the State on May 01, 2014. The film is directed by Chandrakant Kulkarni, while Ajit and Prashant Dalvi have shouldered the responsibility of the story, screenplay and dialogue.

“Doosri Gostha” is presented by Jigisha Creations and has been produced by Dr Shailaja Gaikwad, Manjiri Hete and Prasad Mahadkar of Jeevangani, an organization known for its contribution to the musical field, who have entered film production for the first time.

Story revolves around a young boy from lower caste who had no option but to resort to petty thefts to make both ends meet after he lost his father at the early age. But the boy did not look back once he realized the importance of the education. He kept climbing the higher steps of life ladder with enormous hard work.

Portraying all the ups and downs in the life of the protagonist, the film, Doosari Goshta, captures all emotional values. The story has many dramatic turns and twists and at the same time, focuses on the people who helped him reach his ultimate goal.

On one hand the protagonist is helped to do something for the country, but on the other, the truth does not hide the fact that the progressive Maharashtra State had to wait 50 yrs to find a Dalit in CM’s chair. Conspiracy-counter conspiracy, love-hate, and moments of elation and disappointment are part of the political life….And at the same time, it has human bonding of unparalleled relations… Hence the example carved by the protagonist of the story stands inspiring for the gen-next. Positive approach and uncompromised hard work helped this unparalleled personality to a height, which has been depicted in the film.

The Doosari Goshta has the attractive and inspiring personality, Vikram Gokhale- the national award winner actor- is featuring protagonist in the film. His younger version has been featured by Siddharth Chandekar, who is doing the most challenging role of his career. Anand Ingale will be a ‘Surprise Package’ for his fans. Sandeep Mehta is also doing a very important role. Neha Pendse is in the lead role and other actors include Aditya Ganu, Bharati Patil, Smita Sarvade, Sunil Tawde, Girish Joshi and Mugdha Godbole.. Pratiksha Lonkar and Renuka Shahane will be seen in guest appearance.

Noted designer from the Hindi film industry, Rahul Nanda has shouldered the responsibility of designing the publicity for the film. The film has been shot in Delhi, Mumbai and Solapur. Eknath Kadam is art director of the film, while Suresh Deshmane has shouldered the responsibility of cinematography. Ashok Patki and Mangesh Dhakde are music directors of the film. After Tukaram and Aajcha Divas Majha, the national award winner Dhakde has given an un-matching touch to the film. Editing has been done by Jayant Jathar, while Vijay Bhope is sound designer. Sachin Lovalekar and Laxman Gollar are costume designers while make-up has been done by Satish Bhavsar. Piyush Panchal is choreographer and Jitendra Kulkarni, Shripad Padmakar are line producers. Pratima Joshi is associate director of the film. Bhagyashree Jadhav and Abhijeet Guru are the chief assistant directors of the film.