Shreyas and Deepti Talpade are back as producers after a hiatus of six years with the Sameer Patil directed Poshter Boyz. The film has an ensemble cast of Dilip Prabhavalkar, Hrishikesh Joshi, Aniket Vishwasrao, Pooja Sawant and Neha Joshi. The producer duo gets talking exclusively with us over their experience of making the film and other interesting things.

How was the experience of being the producers for Poshter Boyz? How challenging was it?

Shreyas: The idea about the film was right and things started falling into place. It was challenging though. The task now is to promote and make sure it reaches out to every household in Maharashtra. This is the toughest part for any producer. But creatively if you ask me, it has been a really satisfactory experience.

Deepti: It was very good. I am sure everyone says the same thing (laughs). Sameer (Patil) narrated the idea in last July and now we are ready with it after a year. It was a joyride. We had properly planned the pre-production. We were going to get rolling in December but since Dilip kaka (Prabhavalkar) was available in January, we also got time in December to plan. Hence, we were able to complete the shoot in 25 days. So there was no such stress. Talking about challenges, every day was a challenge.

Weren’t you tempted to act in Poshter Boyz?

ST : (laughs) It definitely crossed my mind. In fact, Sameer (Patil) suggested that I should essay the character played by Aniket Vishwasrao. But when we started developing the screenplay, I realized I won’t be able to do two things simultaneously. I had to make sure the director gets everything he wants. Plus, we had to complete the film in a limited time. And there are good actors around. It doesn’t make sense that since I am the producer, I should also act. It is like, it’s my bat so I will do the batting (smiles).

What is the USP of Poshter Boyz?

ST : It is the originality of the concept. Just imagine – if you visit a police station to complain about something and you notice your own photo listed there as a pickpocket, how would you feel? Similarly, if that photo is pasted everywhere in the city, how would you react? Your friends will believe you, but what about others? Such a thing happens with the characters of Poshter Boyz and it creates problems in their families. This is its USP.

DT : The USP is the fact that Shreyas has produced a Marathi film (laughs). The concept itself is the USP. When I heard it is a confusing drama about three people, I thought it must be about extra-marital affair. But then I came to know it is about Vasectomy (nasbandi), a subject that is unexplored. So this is the film’s USP.

Did you ever have any difference of opinion with Shreyas?

DT: No, because I am the boss and the boss is always right (laughs). Once Avadhoot Gupte said in an interview that generally every debate has two sides but when it comes to him and his wife, there is only her side, which is always right. So there is no scope for argument (laughs).

What is your opinion on the current scenario in Marathi cinema?

ST: It’s very good. We have new breed of filmmakers coming in with varied subjects. The reason why people are experimenting with newer subjects is because the youth has started patronizing Marathi films. They are proud of Marathi cinema and this has motivated filmmakers.

DT: It is doing really well. People of Maharashtra have always supported theatre. But now they have also started supporting Marathi films so much that now we have also started speaking about film’s opening. I really hope more people go to watch Marathi films in theatre, not just my film but also other films; like have Rama Madhav and Rege coming up now. If we are expecting good content from Marathi films, then the audience should also show enthusiasm towards it.

ST: As a producer, I am only focusing on Poshter Boyz right now. I am acting in a Hindi film called Wah Taj. I am doing a Marathi films Baaji. There is another film that will start in October. 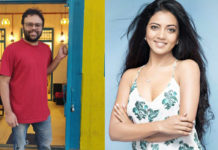