Recently the colorful & honored Event, Dadasaheb Phalke Awards took place at Grand Hayyat Hotel at Santacruz. It was the third year of this Award function. Adv. Mohanrao Pimple is the president of Dadasaheb Phalke M.S.K Trust.

Actress Sarla Yewalekar while expressing her feelings said, “I am feeling so happy that I cannot express that feeling in words. I have received many awards by now but I have received Lifetime Achievement Award with Dadasaheb’s Name which is higher than any award. I am so glad that I came in this industry. I thank everyone who helped me till date for everything.”

Shri Vinodji Tawade said, “First of all I thank you all for inviting me for this function. Actually I get such invitations but I don’t go many times because I feel cultural minister should show his presence through his work instead of his presence on stage for giving awards. To make Prime Time shows available for Marathi films in Multiplex is the duty of Cultural Minister. I came here for two reasons. One is Dipali Tai once stand for election and one political body should stand behind another political body. And the other one last time when I was present with Hon. Chief Minister I made an announcement that Dadasaheb Phalke should written in Marathi So I came to see whether it is written in Marathi this year or not. As before every cinema National Anthem is played in every theater we are making one rule in near time that short documentary of Dadasaheb Phalke of 30 seconds should have been shown.”

This award function has one more special award named “Shramshrey Awards” which was given to needy artist as well as back stage technicians. With this award they have been given some financial help. This year “Shramshrey Awards” gave to Makeup Artist Arun Pillai, Assistant art director Balu Kamble, Light man Madhukar Chaughule and Spot Dada Balasaheb. 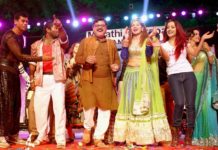 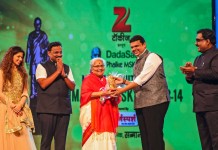