Produced by Siva Kumar R. & directed by choreographer turned filmmaker Anddy, ‘Gavthi – Apman Nahi Abhiman’ is in theaters currently from 30th March. We did an exclusive interview with the lead pair of the film, the debutants actor Shrikant Patil & actress Yogita Chavan about the film & about themselves!

Shrikant Patil: Actually this film is based on the real life struggle of our producer Siva Kumar Sir. When he came to Mumbai for the first time he was called by such names in the city. My character in the film too faces the same treatment. It was Siva Sir’s perspective that one should take this as ‘abhiman’ & not ‘apman’!

Since Siva Kumar Sir is a South Indian & your character in the film is of a Maharashtrian, the cultural background does it affect the story? 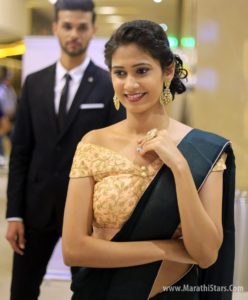 Shrikant Patil: In our country people from different places who become successful have their origin from villages. So the cultural background doesn’t matter. But some people forget their origins after shifting to cities.

Tell us about your ‘origin’ story. This is your first film, how did it happen?

Yogita Chavan: My background is from dance just like Anddy Sir (the choreographer turned director of ‘Gavthi’). One & a half years ago I started acting & then ‘Gavthi’ happened.

Did you audition for ‘Gavthi’?

Yogita Chavan: Yes after giving my auditions I waited for the call & Anddy Sir himself called me & broke the news to me that I was selected for the part!

Anddy Sir is a choreographer  turned filmmaker, so it’s obvious that ‘dance’ would be an inherent part of this film. How much is dance important to you in your lives?

Yogita Chavan: My career started with dance, I used to perform in ‘Marathi Bana’ earlier, so yes dance is very close to my heart! And I think ‘acting’ is a part of dancing too.

Shrikant Patil: Well I am not really good at dancing, but in this film since my character has a raw ‘gavthi’ style of dancing I could do it & I enjoyed it too!

The Trailer of the film suggests it has many genres from romance, thriller & the second half feels completely different. 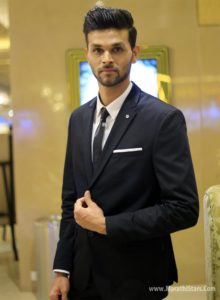 Shrikant Patil: In the film you can see the journey of the protagonist from being a teenager to a matured young man. The film isn’t just based in the village, neither is it just a love story, there are many conflicts in the film. There’s romance, there’s a family drama between the hero, hero’s father & mother & there is a strong social context of the village. This film cannot be type casted into one genre as such!

Yogita Chavan: As an audience when I look at the film I feel it’s a complete entertaining package. There’s romance, drama, comedy & overall it’s a pure entertainment package!