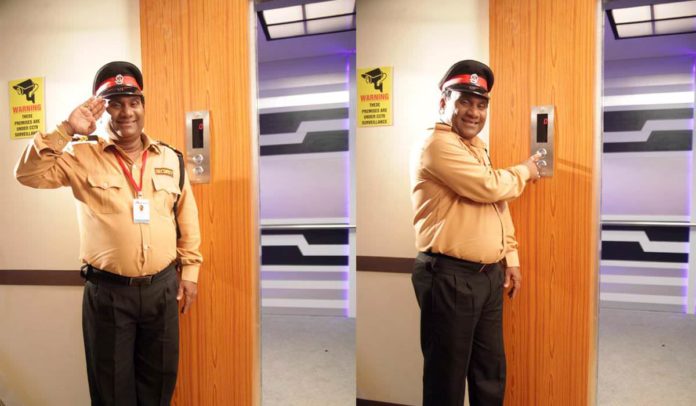 After entertaining the audiences through mediums like theatre, TV & films, Maharashtra’s favorite comic star ‘Bhalchandra Kadam’ aka ‘Bhau Kadam’ is all set to explore the new medium of web series! Bhau Kadam will be seen in & as ‘Lift Man’ in Zee 5’s new web series & the episodes of the series are already out on the streaming platform. On this occasion, we had an exclusive chat with Bhau Kadam!

The idea of creating an entire web series on the character of a ‘Lift Man’ as a lead is very unique! Usually, such characters are less important. How did you react to this?

Yes, it’s true! I found it very unique too. Zee 5 needs to be given the credit for it. I too thought what would a liftman do in his daily routine? One aspect of it is talking to people. I thought the people he meets would they be celebrities? But in fact, in the series, he meets common people who come to that building for their work. Now every person has his own style & subject & his/her give & take with the ‘Lift Man’ can create entertainment!

Now you have worked in all mediums of entertainment! From TV, theatre, films to now ‘Web’. How was the process in this medium different?

The process is very similar. The episode lengths are different. Every episode is around 10 minutes long. But through this medium, you reach the audiences quickly! One can become a star overnight thanks to this medium! But along with that, you can also say what really want to say through this medium. And we as actors are also a medium to say those things. And we can reach the audiences quickly with their issues as well.

We have heard from actors of yesteryears that in olden times comic actors were asked to improvise more often, without a script! They were expected to create comedy on their own! How has it changed now? Are there more talented writers now than they used to be before?

Once I asked Mama (Ashok Saraf) about a famous scene from his film ‘Pandu Hawaldar’. Whenever I saw the film I always thought that the scene was improvised by Mama himself. But Mama told me that the scene was in the script itself! So yes there were talented comic writers before too. I rather feel some new people today don’t really understand how to create comedy. They cast some actor to expect him to do comedy. But not everyone is like that!

Do you think the medium of ‘Web’ is the future of entertainment?

Yes, I believe this won’t stop now! It’s only going to get bigger. I think this medium will evolve with time. Just like in cricket we first had ‘Test cricket’ & now we have ‘T20’ but at the same time, we also have test cricket. So different forms of web content will evolve and all of them will have audiences. Moreover, in today’s world, the everyday traveling has become very time-consuming. People are consuming more & more content through mobile at this time.

Do you think a comic actor has a social responsibility? Sometimes humor might offend certain parts of our society. Are you conscious about it?

Yes yes, we have to be conscious all the time. Even when we do skits for ‘Chala Hawa Yeu Dya’ every now & then we edit a line because we think it is risky. Unnecessarily people would misinterpret it. Moreover, humor can have an offensive effect. And one can always do comedy without offending anyone!

There are two kinds of actors; one who is very spontaneous & other who are very serious & rehearse before they actually do a scene. What kind of an actor are you?

Primarily I belong to the first kind. I love to be spontaneous with my co-actors. But while being spontaneous an actor shouldn’t miss the basic essence of the script. Some actors keep doing their own thing & miss the point. And the other actor (co-actor) suffers because of it. I think since the time is specific for specific mediums, one should hit the punches rightly in the given time.

You have received lots of love from the audiences. How has that affected you in your personal life & has it given you emotional satisfaction?

I remember when I used to do theatre, I always wished people knew me more & loved me. Now they do! But at the same time, I also make it a point that I don’t let myself flow with it. Nowadays I quickly understand if I see a person from a distance who wishes to click a selfie with me. I try avoiding that because people are more interested in clicking selfies & showing it to other people rather than meeting & talking to me! I am right in front of you talk to me, ask me what you want & keep it with you as a memory! But when people come & see my plays I do click selfies with them. I think in that scenario it is my responsibility.