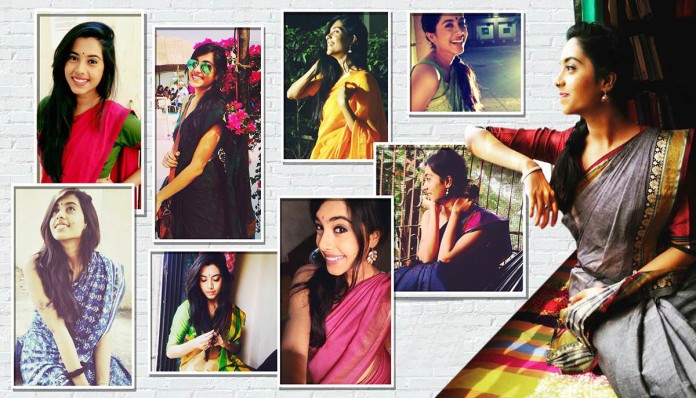 Everyone has their own choice, own style of dressing and their own lookout to see themselves in sweet and sober look. Someone said about fashion and its relevant in today’s fashion lifestyle- “It’s a new era in fashion – there are no rules. It’s all about the individual and personal style, wearing high-end, low-end, classic labels, and up-and-coming designers all together.”

Ethnic wear is one of the comfortable and confident dresses among all the stylish fashions. Now we have lot of options in ethnic wear. Our cute and adorable actress Sakhi Gokhale is totally in love with ethnic wear. Sakhi is famous for her gorgeous looks and innocence character of ‘Reshma’ from Dil Dosti Duniyadari serial. Sakhi Gokhale has only gone strength to strength and placed herself as a wonderful actress. The young pretty girl has impressed everyone with her terrific acting skills. Her simple look on screen is very adoring and she has managed to carry her typical Indian outfits so well that it complements her entire look. That’s about her reel life but in real life as well she loves to wear ethnic clothes. Sakhi prefers ethnic wear over western outfits to such an extent that her wardrobe is a great mix of Indian Ethnic dresses and saree.

The talented girl has a fetish for saree and also owns a huge collection of sarees of different types. Whenever she gets free time, she loves to practice saree draping. Sakhi enjoys flaunting her ethnic sarees during festive season. The actress is often seen sharing her pictures in ethnic wear on the social media platforms for her fans. She is one actress who refuses to follow fashion trends rather believes in making her own fashion trend and takes it ahead flawlessly.