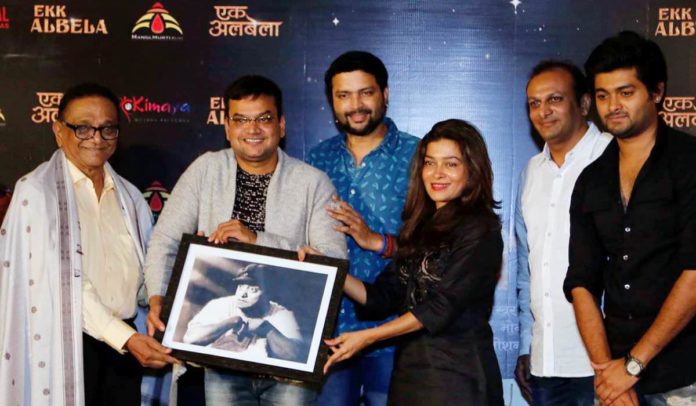 Bhagwan Dada is a legendary figure of Hindi cinema. No book on the history of Bollywood can be complete without the mention of Bhagwan Dada. Albela – the film which he directed as well as acted – changed the way films were made in India in ways more than one.  A 1951 film that was a trend setter and even had a successful re-release in the theatres

However, the man isn’t much remembered now. There is very little info about him even on the internet.  So in such a situation a biopic on him gains a lot of importance. Ek Albela is an attempt put on the silver screen the life of the maverick filmmaker who made dozens of popular action films and even introduced the concept of the dancing hero in Indian films which later became a ubiquitous feature of Indian cinema.

The teaser gave an intriguing peek into the film and definitely left us asking for more.

The teaser launch of the film Ekk Albela was attended by the cast and crew in full force. Mangesh Desai has been casted in the titular role and he spoke about the challenges and the fortune of getting the opportunity to play such a role. Shekhar Sartandel also spoke about the journey of the three years full of trials and tribulations that film took to get made.

The high point of the afternoon apart from the impressive teaser was an impromptu jig by Mangesh Desai to the very popular tune of ‘Shola Jo Bhadke’ . What was even more memorable was that he was joined by Bhagwan Dada’s son, Arun Palav, in the dance and the enthusiasm shown by the now old man was infectious.

The film has been produced by Sangeeta and Krish Ahir of Mangalmurti Films and Monish Babre of Kimaya Motion pictures. It is due to these two production houses the film has come into being.

Baban Adgale has design the sets of that black and white era, while the camera department has been helmed by Uday Devre.

The film is slated to release on 24th June.