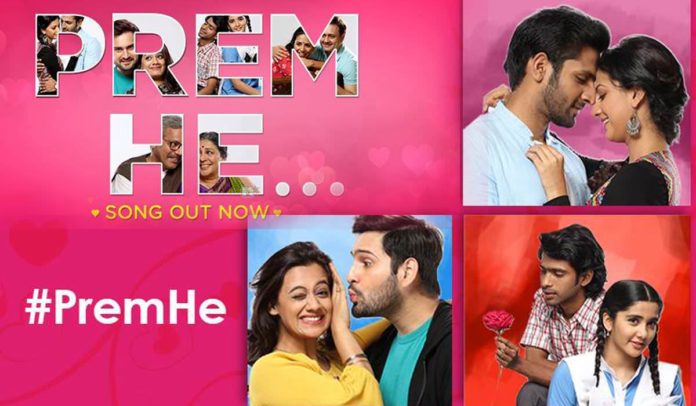 Zee Yuva’s upcoming limited episode series is being eagerly awaited fans of all age-groups. Dedicated to the relationship of love ‘Prem He‘ will present different stories after every one or two episodes. The very first couple who’ll meet us on 27th Feb are Vaibhav Tatwawadi & Tejashri Pradhan in their love story titled ‘Ruperi Vaalut’.

In this video both Tejashri Pradhan & Vaibhav are seen on the sets of ‘Prem He’ & we can actually sneak into their shooting. Both will be working together for the first time as a romantic pair & they are really excited for it, so are we.

Spruha Joshi & Siddharth Chandekar are making a comeback on T.V. together with ‘Prem He’. However previously they shared screen space on T.V. as siblings! And as Siddharth clarifies in this video, in a film they did together, they were busy treating each other’s depression & hence now they are all set to romance each other in ‘Prem He’.

On the other hand a gem of an actress, Veena Jamkar is making her television debut! It’ll surely be a treat for her fans to watch her opposite the evergreen Marathi star Sunil Barve!