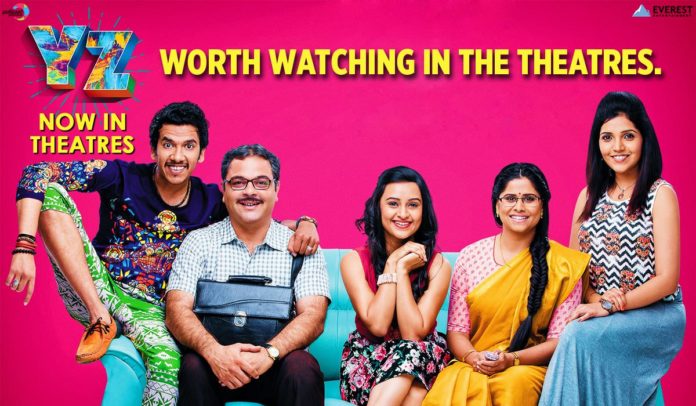 Marathi Cinema is having a particularly ordinary year. We are more than half way through 2016 and there are only a handful films that are worth recommending. But now as we have entered the later part of the year, things are looking brighter. After the charming Half Ticket that released last month, with YZ we now have another marathi film that is worth watching in the theatres. YZ is not only laden with tongue-in-cheek humour as the title and the promos would suggest, but is also a thoughtful film.The note on which the film ends is what left me pleasantly surprised and most impressed.

YZ is a film of two different halves. The film begins rather humorously with an introduction to the protagonist Gajanan (Sagar Deshmukh) – a single, virgin and socially very awkward man in his 30s. A simpleton to the core, he is born and brought up in Wai and now teaches history in a local college. He dreams of visiting the ancient ruins of Machu Picchu in Peru, at least once in his life time.A shy and non-engineer guy like Gajanan has troubles getting married. He doesn’t have the confidence to approach a woman himself and isn’t a very saleable ‘product’ in the arrange marriage market either.The scenes in the ‘vadhu-var melava’ wherein we are shown Gajanan being introduced with a remark that he has no four-wheelerare particularly humourous. He is transferred to a Pune collegeon a temporary basis for 6 months and comes into contact with the college cool dude – ‘Battees'(Akshay Tanksale). How these 6 months in Pune spent by Gajanan have a profound impact on him as a person and on his life, is what YZ is all about. A kind of coming of age film, albeit of a man aged 33.The early parts of the film are full of funny lines, mostly involving the conversation between Battees and Gajanan, as the former is trying to teach him to develop a personality that would impress women. Battees calls this a YZ attitude. There is nothing really very original in the plot seen before in films like Hitch, but at least the film made me laugh more than a couple of times.

The film breezes through the first quarter of the duration, but without much substance or intent, till Gajanan is visited by the prospective bride Parnarekha (Sai Tamhankar). The Parnarekha chapter of Gajanan’s six month stay has to be the most engaging as her well drawn character sketch gives the scenes a lot of humour born out of situations and character quirks. It has the right mix of content, direction and humour. Saie Tamhankar’s convincing performance goes along way in making her portions of the film so impressive.

As the film enters the second half there is a sudden switch in the mood with the film getting thoughtful. It would have been easier for the makers of the film to stick to the fun filled atmosphere of the first half, but they haven’t and that is certainly commendable. However, as the film starts getting a little depth you cannot shrug of the feeling of the proceedings turning a little dull. Take for example the long preachy speech by Gajanan in his lecture about how we are more interested in building statues of our historical figures but don’t bother to imbibe the values they stood for. Though the thought behind the second half is appreciable, some scenes get a rather cliched treatment like the one in which Gajanan’s Aunt confesses how married life sucked away her love for reading. Wiser from his experience with Parnarekha and courtesy the company of Battees, Gajanan starts to express himself more freely. He develops a confidence to just be himself. He moves out of his Aunt’s house with whom he was staying in Pune and starts living in a rented place. This new avatar of his impresses his cousin’s young friend Antara and she develops feelings for him. Also, Gajanan coincidentally meets his long lost childhood sweetheart Saylee (Mukta Barve) and realises that he still has feelings for her even after all these years. Saylee is in a serious relationship with another man, but still not married. Parnarekha, in the meanwhile, again meets Gajanan in a reformed avatar taking him by pleasant surprise.

So, Gajanan – the once perennially single man – now suddenly has three women in his life with whom he has the possibility of getting into a relationship. As an audience we try to second guess the lady Gajanan will walk down the aisle with, but it is here that the filmmakers pull out an ace byside-stepping all cliches and ending on a note that very few filmmakers in India would have chosen to.

Theatre artiste Sagar Deshmukh delivers a knockout performance in his first major role in a film. The camaraderie he shares with Akshay Tanksale is one of the biggest positive of the film.There is hardly a dull moment when the two are on screen together. Another major plus are the consistently funny dialogue. The other ladies Parna Pethe and Mukta Barve don’t get a lot of screen time, but are well cast.

The writer-director pair of Kshitij Patwardhan and Sameer Vidwans have come up with another fine film after last year’s Double Seat. Here’s wishing the pair treat us with more such quality cinema which we haven’t seen much in the recent past.

YZ is a consistently humourous film, with a solid performance by the lead actor Sagar Deshmukh. It also leaves you pleasantly surprised by its end.