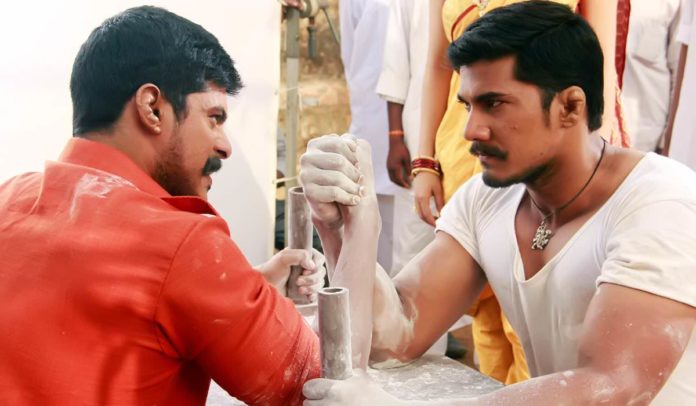 ‘Like how Kushti is Maharashtra’s pride, Lavani is Maharashtra’s heart’, this adage is repeated a couple of times in the film Taleem. The intent here is to make a film about these two pillars of cultural heritage of Maharashtra. The basic premise is interesting, but the melodramatic approach by the director wastes whatever little dramatic potential the film has.

The film begins with us seeing a wrestler being killed in an arena. Next we see a kid being chased around the village by a bunch of bullies. Getting impressed by the never say die attitude of the kid, the wrestling coach of the village inducts him into his training arena much against his mother’s wishes. This is the same coach whose wrestler had died during a fight. We then witness the growth of the kid Bhavdya into a competent wrestler destined to make the whole village proud. But then comes a dancing troupe of the lavani kind in the village and our protagonists is smitten by the star dancer of the troupe.

Taleem had enough opportunity to become an absorbing account of the inner workings of the world of Kushti. The rustic sport requires dedication from a tender age and is widely followed by people in the rural areas. We do get to see glimpses of the world of wrestling with all its rivalry attached, but, rather sadly, the director seems to have a thing for melodrama. There is a jarring background score that plays in every other scene, making the film rather difficult to sit through. This is not to say that the screenplay is without clichés like the protagonist actually turning out to be an adopted son, but the loud treatment given to the material at hand is the major undoing of the film.

The lead actor Abhijeet Shwetchandra does look the part, but his acting potential is quite limited. The wrestling scenes are decently shot, but do get a little repetitive after a while. Mitali Jagtap who plays the lead actor’s mother makes the best impression and the few scenes she gets are the better parts of the film.

The film does have noble intentions but the loud melodramatic approach does injustice to the subject and the intent.