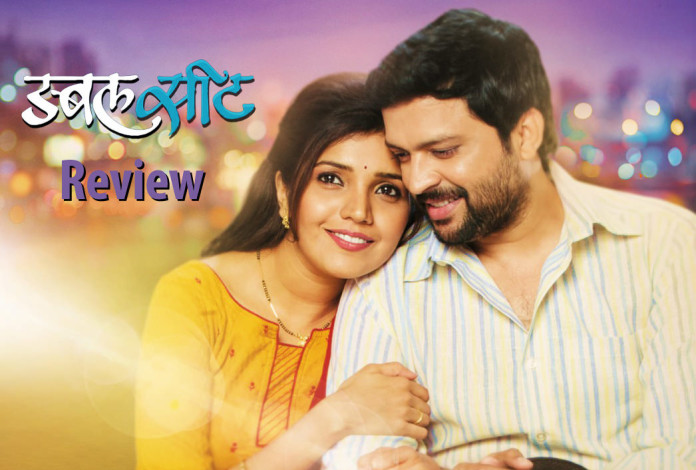 It is not rare to find films you can relate with. But Double Seat goes a step higher. It makes you see yourself in it, if you happen to be a Mumbaikar from a lower middle-class or someone knowing the city well. The film is yet another simple yet appealing winner from the director-writer duo of Sameer Vidwans and Kshitij Patwardhan.

The story revolves around Amit Naik (Ankush Chaudhary), a young man staying with his mother (Vandana Gupte), father (Vidyadhar Joshi) and younger brother in one of the famous chawls of Lalbaug, Mumbai. He is newly married to a bubbly young girl (Mukta Barve). The couple is devoid of any sort of privacy due to the crammed space. After having had enough of it, Amit decides to move to another place with his wife.

Double Seat portrays a very real and authentic picture of a life in a Mumbai chawl. The behavior and mannerisms of the characters and their humor assert that the key areas are taken care of successfully. But one also shouldn’t forget the production designer Siddhartha Tattoskar for creating a visually real picture of the interiors of a chawl. He is aptly helped by DoP Arjun Sorte.

Woes of the lower middle-class isn’t a novel topic as such, especially in Marathi cinema. But the topic surely doesn’t appear redundant over here. The contemporary script and creative presentation bring in a lot of freshness. Its outcome is also felt in the continuous dose of humor. It doesn’t let the proceedings appear sad even during some serious or tragic moments.

What would have been ideal is some overwhelming moment at the end. But that is missing here as you don’t exactly get the kind of kick you expect from it. This is the only major drawback of Double Seat, along with minor pacing issues.

The song ‘Mana Phiruni’ also plays a major role in making sure the film connects with the Common Mumbaikar. The film also has a couple of other impressive tracks like ‘Kiti Sangaychay Mala’ and ‘Mann Suddha’.

It is vital in such films for the performances to be top-notch and that is exactly what is provided by the actors. Ankush Chaudhary puts his right foot forward and provides a very convincingly real portrayal of a character staying in a chawl. Mukta Barve is equally good with yet another flawless act. The chemistry and co-ordination between both actors is natural.

Vandana Gupte excels in both comic and serious situations. Vidyadhar Joshi is perfect as a hot-headed father. A series of good supporting performances further enhances the cause.

Double Seat is real and heartwarming. It is a film that will instantly connect with Mumbaikars. It is expected to do well at the box office.