Poshter Girl is directed by Sameer Patil who had also directed the film Poshter Boyz (2014). It is not exactly a sequel of the 2014 film, but it is still similar in style, flavor and intent. Now, I felt Poshter Boyz was a totally misfired attempt and did not even do well commercially. So, it did not really seem wise to make a similar kind of film. However, now that Poshter Girl is made lets shift the focus on this latest film. 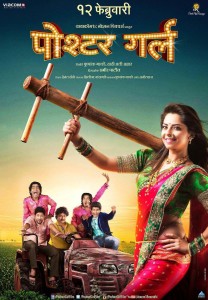 Poshter Girl is definitely an improvement over Poshter Boys. Sameer Patil seems to have learnt from his debut film; his second film does not have as many issues. But, some negatives of Poshter Boyz are found in this film too.

The film is about a village called Tekawade and how due to female infanticide and a rampant misogynist thinking, the village is devoid of any young girl. Tekawade has been blacklisted by all the neighboring villages and nobody is willing to marry off their daughters into that village. However, a strong willed and pretty girl named Rupali (Sonalee Kulkarni) comes to live in the village and all hell break’s loose. A group of five young men – Bharatrao (Hrishikesh Joshi), Bajrang (Aniket Vishwasrao), Arjun (Siddharth Menon), Ramesh (Akshay Tanksale) and Suresh (Sandeep Pathak) – enter into a game of one-upmanship to win Rupali’s heart and get her hand in marriage.

Now, the biggest positive of the film has to be its casting. Hrishikesh Joshi was one of the best things about Poshter Boyz and most likely that is why he has been given a lead character here. In Poshter Girl, too, he steals the show and brings out the most laughs as the childless Uncle Kishan of Rupali who is supervising over this competition (or swyamvar) among the young and most eligible bachelors of the village. Sonalee Kulkarni does justice to her part in the film and doesn’t overact for the most parts. The bunch of eligible bachelors too are well casted and do bring out laughs at some places, but they cannot help being over the top, much like the acting in Poshter Boyz.

Another negative of Poshter Boyz that is found here is the lack of fully developed characters. Apart from Kishan and Rupali almost all other characters are mere caricatures. The screenplay credited to Hemant Dhome and Sameer Patil, has interesting back stories to Bharatrao and Bajrang, however it just scratches the surface and does not allow us to connect with the characters at all. It has all the obvious double meaning jokes and other slapstick scenes that people expect from such a comedy. The gags hardly have anything novel in them, but they might work for the target audience. Poster Girl, thankfully, does not have any ridiculous product placement like Poshter Boyz and neither does it have any inane cameo just for the heck of it.

The attempt to tackle social evils of female infanticide and misogyny in Poster Girl are also marginally more successful than the tackling of the taboo of vasectomy in Poshter Boyz. But, the way the message is put across is certainly a bit pushy and preachy. However, though not fully successful, the attempt to deliver a message in the form of humour is definitely worthy of a little praise.

Despite being better than Poshter Boyz, the film is only partially successful in delivering a message under the garb of humour.