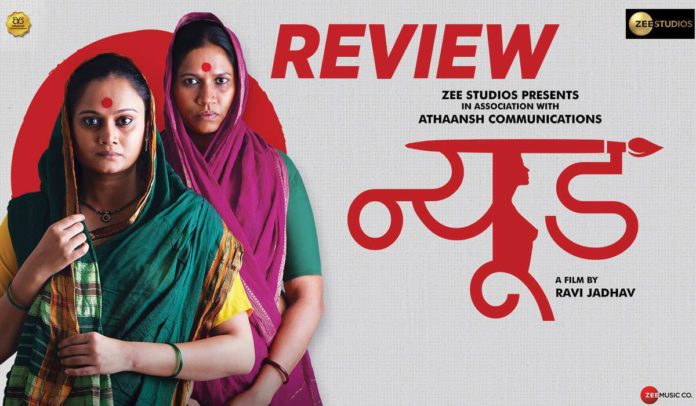 Nude is a film that needs to be understood in two ways. One that is the ‘literal’ way which is about a middle aged woman ‘Yamuna’ (Kalyanee Mulye) who after being betrayed by her husband lands up in Mumbai with her son & ends up being a nude model for fine art students at J.J. School of Arts (an iconic art college of our country). The other way is more within the lines. The alternate title used smartly in the promotions of the film ‘Chitra’ is a sign for this other allegory. An artist at the college (Om Bhutkar) who becomes a silent companion of Yamuna throughout her journey discovers ‘Chitra’. ‘Chitra’ represents the art work that he creates with the help of Yamuna & also the hidden meaning of ‘Nude’.

‘Chitra’ also represents ‘art’ in totality. ‘Art’ that means different things to different people. An exact same painting could evoke different emotions from beings of the same species. These emotions could bring out the inner most desires of that being. A painting of a woman without clothes would represent the ‘soul’ of humanity to some & to some it would seem sexually explicit. It’s sadly ironic that one couldn’t resist associating the famous Rabindranath Tagore quote told to us by our beloved Pu La Deshpande with ‘Nude’.

Tagore said, every painter watches the sunrise in a different way. Hence there are never too many sunrise portraits, there’s always room for more. In a scene (from Nude) when we first see 5-6 fine art students painting the same woman sitting in front of them, we could associate her with the sun. But then later we could also associate this ‘difference of perspective’ theory on people who get violently offended or sexually excited by ‘art’!

From the very first frame of ‘Nude’ we are enticed by the visuals. It’s like Ravi Jadhav & his marvellous technical team (the cinematographer, editors, & even sound artists) announcing to us loud & clear that their film is about ‘paintings’! Lively moving images (paintings) where the reality is not treated that stark to pull us out from the visual artistry. Yes the film establishes it’s world with great detailing, but makes sure that the film isn’t about the world.

The major portion being based in Mumbai & that too in Mumbai slums the film doesn’t focus on it. The focus is very much intimate. We are with ‘Yamuna’ all the time. Her son (Madan Deodhar) & her aunty (Chhaya Kadam) are important to Yamuna & hence to us. Yet their interaction with us is as much it is with Yamuna. Her aunt is the driving force in Yamuna’s life in the beginning of the film but soon Yamuna is in her own control. Her son is not a completely developed character on it’s own, & has a few logical errors in his arc, yet he delivers the final ‘kick’ in the film. Yes Nude has a fantastically hard hitting climax or a ‘takeout’ scene.

Kalyanee Mulye as Yamuna in the first few scenes appears to be putting up a show. Her mannerisms even appear strangely fake. But soon we ‘get’ her. We accept her rendition of ‘Yamuna’. Those mannerisms no longer feel strange, they feel very real. She gives a sublime performance in all aspects of acting. Her command over a unique rural dialect, her mannerisms, her body language & the way she emotes her inner trauma all of it is outstanding! Chhaya Kadam plays a character similar to what she played in ‘Sairat’ but does it with perfection. Other performances in the film are decent too.

The real heroes of ‘Nude’ (Chitra) are Ravi Jadhav, his technical team & even Sachin Kundalkar who has contributed in the screenplay & dialogues of the film. The long journey for ‘Nude’ is known to us all, but our long wait has been rewarded in every way. ‘Nude’ is a film that pleases our senses & yet gives us a bit unpleasant food for thought. It affects us in a way ‘art’ is supposed to affect!

‘Nude’ (Chitra) deserves a watch from every creative soul & from those who adore ‘art’, understand it & imbibe it as a way of life.