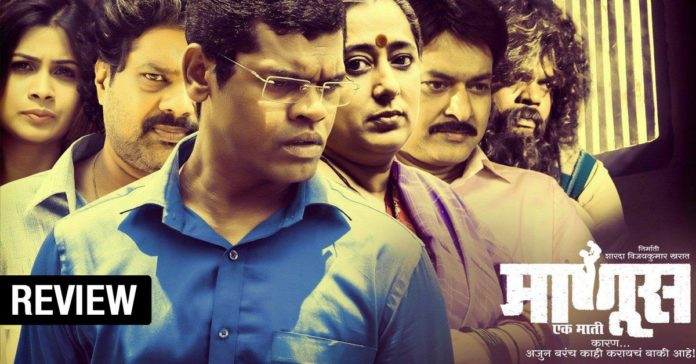 – From the Hollywood Musical “Singin’ In The Rain”

‘Manus Ek Mati’ surely made us laugh! Though unintentionally & quite ridiculously. Marathi cinema had many such wonders (read disasters) in recent times (last 2-3 months) which were competing for the ‘so bad that it’s good’ title, but most of them were simply boring. Finally we have a winner!

A decade ago, came a Marathi film titled ‘Sakka Bhau Pakka Vairi’. The film was loud, stereotypical & quite obvious. But it was a huge hit in the rural areas. There were many dying ‘touring talkies’ that were revived because of it. Why? Simply because it made a connection! Even for an ‘elite’ audience such films can have the strength to manipulate them emotionally. So the point is ‘Manus Ek Mati’ belongs to the same genre. And the genre or style is not outright waste.

The story of this film is unnecessarily told in a flashback. Baban (Ganesh Yadav) & Laxmi (Harsha Gupte) become parents to an orphan child. The child grows on to become a smart, studious, all dancing, all fighting film hero, Vijay (Siddharth Jadhav). Then he falls in love with Vidya (Ruchita Jadhav) & they get married. Now the proceedings that follow have no indications of a certain change that we see in all major characters. There’s this ever-present narrator Anna (a friend of Baban) who exists just for the sake of existing.
Later part of the film also shares resemblance to 2016’s major hit ‘Natsamrat’. A tragedy is a risky business, yes it can be loud or even theatrical in some cases but it still needs to be a decently made film. When all the basics of filmmaking are given a toss, & the whole attention is on the message & the loudness with which the message is being delivered it becomes a true disaster.

Both Siddharth Jadhav & Ganesh Yadav are good actors, but the film doesn’t allow us to ever enjoy their skills. Not just because they are made to overdo their stuff, or have got badly written characters & situations but also because the editing of the film keeps abruptly cutting almost every single scene in which we are slightly trying to invest us. The background score of ‘Manus Ek Mati’ is unbelievably loud.

If that’s not enough the film has a truly lethal item number placed as abruptly as possible within the already messed up narrative. Indra Kumar, a Bollywood hero from the 90s makes a cameo appearance (god knows why) in this song alongside another 90s icon ‘Milind Gunaji’! Certain films that are bad, know that they are bad, but ‘Manus Ek Mati’ has no idea whatsoever about how & what it’s turning out to be. And that is the sole reason it can be enjoyed for its unbounded ridiculousness.

However the biggest absurdity arrives after the film ends. Post the runtime of the film, when the credits appear, there also appears a lady (assumably the producer) who again gives the necessary ‘message’ if at all the audience failed to ‘get it’ after watching the whole film. Even then we burst into laughter.

‘Manus Ek Mati’ is a film that quite disrespectfully abuses the medium of cinema & story telling. Yes the film is unintentionally funny & all, but that’s not what we want. Or do we?