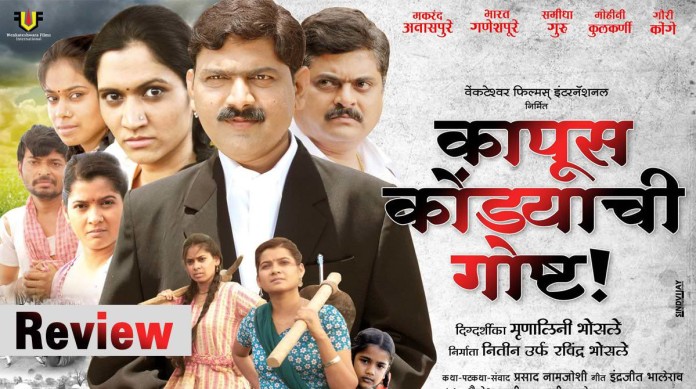 A peculiar thing about this Friday’s Marathi releases is the common cast and crew. Both films are written by Prasad Namjoshi. Both of them have Makarand Anaspure, Bharat Ganeshpure and Gauri Konge. They are also set in rural Vidarbha and deal with the conditions of the impoverished farmers of that region. However, this film is directed by Mrunalini Bhosale, whereas Rangaa Patanga was written and directed by Prasad Namjoshi. And there is where the difference between two lies. That difference is glaring. 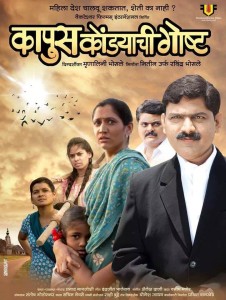 Rangaa Patangaa for the most part was well directed and side stepped of clichés. Also, what Kapus Kondyachi Goshta lacked was a crew like Rangaa Patangaa. Bhosale’s film comes across as techinically deficient and that ends up being its biggest negative.

Jyoti, Chanda, Ratna and Bali are troubled by the villagers after the untimely demise of their father. The oldest Jyoti decides to quit college and pursue farming. Her other sisters also decide to lend her a helping hand. Farming is mainly considered to be a man’s job. But these four sisters face all odds bravely and stick to farming. Advocate Pawde becomes their pillar of support and stands behind the girls in every crisis.

Now, the story here is predictable. From the beginning we have a feeling that the film is going to be about the triumph of women against the misogynistic society. Add to that the way the lack of a grip the story has over you. The acting here is uneven. Samidha Guru has good screen presence but you cannot help feeling something urban about her demeanor. Makarand Anaspure who was mighty impressive in Rangaa Patangaa isn’t as effective here, probably because of his character.

Though there is no denying the noble intentions of the director, one cannot help feeling that a more capable director might have done more justice to the story which is based on a true incident. The technical side of the film comes across as weak and isn’t successful in putting across the inspiring story with the desired impact.

Well intentioned, but lacks a deft hand in direction. The weak technical side also hampers the film.