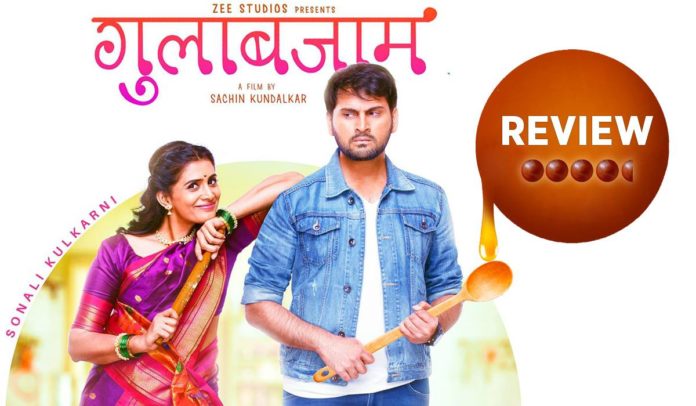 Sachin Kundalkar’s films in recent times had an obsession of being contemporary & more ‘youth’ oriented. Though his films had heart & a certain novelty, they never represented Sachin Kundalkar’s full potential. But with ‘Gulabjaam’ Kundalkar is back where he left from at ‘Gandha’ around 9 years ago! This is the cinema that an auteur like Kundalkar deserves to be known for!

From the very first frame of the film ‘Gulabjaam’ feels so genuine & in love with it’s own subject. The subject of ‘food’ is the hero of the film but it’s soul has much larger canvas that could represent any other human passion or vocation! The film keeps mentioning Imtiaz Ali’s Ranbir Kapoor starrer ‘Tamasha’ at quite a few instances & that too very coherently within the screenplay. Yes it’s a tribute but more than that it’s the self awareness of ‘Gulabjaam’ that it shares the spirit of ‘Tamasha’ without exploiting the original film or forcefully borrowing from it!

The trailer & promos introduces us to both characters accurately as much we need to know them before the actual film. The only possible flaw in the film remains the back story of Siddharth Chandekar’s character. By back story I don’t mean his background of ‘London’ or what pushes him to take the decision of learning Maharashtrian cooking in Pune, it’s more about the connect the film tried making with his past that is shown in the trailer too, the very moment he eats the ‘Gulabjaam’. Sonali Kulkarni’s character has a twist which has been safe guarded in the promos & trailer. That twist is associated with her back story & together (the back story & her complete character graph) represent the greater meaning of the film so beautifully.

The biggest asset of the film is the chemistry between the two characters both on paper & execution which also includes the flawless performances. The first half excels on so many different levels. It makes us care for the characters, understand their personalities, it entertains with smartly crafted humour & light hearted moments & it makes a very strong emotional connect! The second half only because of comparison with the first appears a little week but on it’s own it’s really good. The film ends on a predictable yet soothing note. The takeout moments weren’t really essential though they don’t harm the film.

Siddharth Chandekar has matured into a fine subtle actor & ‘Gulabjaam’ is his finest work till date! Sonali Kulkarni is smooth as always & manages to make her character alive in all different emotional peaks that we see the character in. Chinmay Udgirkar a well-known face from T.V. has a sweet little cameo that is well performed. Along with the actors every technical aspects of the film strike a beautiful symphony together in making ‘Gulabjaam’ an unforgettable experience. From the cinematography, editing, background score, sound recording to the visual tone of the film all seems to represent Kundalkar’s singular vision in the same creative wavelength.

‘Gulabjaam’ is a film that won’t happen often. It takes too many coincidences to happen together all at once for a film like ‘Gulabjaam’ to be conceived, made & released. So make the next coincident possible of watching this film as soon as possible! Our Maharashtrian food culture was never treated with such passion, love & respect before by any film!

‘Gulabjaam’ is a film that is specific about it’s characters & their conflicts but at the same time it could be anyone’s story with any other conflicts & that makes it very much relatable to audiences of all kind.