Nikhil Mahajan’s Baji achieves a rare feat of being a powerful action saga narrated and crafted in an artistic way. It is a benchmark of sorts for Marathi cinema when it comes to presenting a story. However, the film doesn’t rise as much as you expect after a brilliant first half due to various reasons. But there is enough in Baji for the masses to savor it. 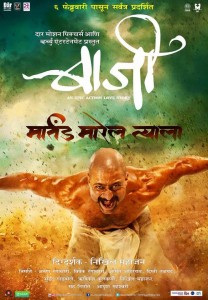 Baji is based in the village of Shrigangpur, where Chidu (Shreyas Talpade) lives a simple life with his mother. Chidu is honest but lags behind in intelligence and bravery. This is the reason why he doesn’t find acceptance from the girl he is madly in love with – his childhood friend Gauri (Amruta Khanvilkar). The village is also known because of the savior Baji, who is believed to exist decades ago.

But there are some like Chidu who don’t believe such tales. But Gauri is a firm believer in Baji as the hero had saved her life during her childhood. She has been in love with Baji ever since and is still waiting for him. Chidu is eager to be her Baji but will he succeed? Meanwhile, Martand (Jitendra Joshi), a harmless villager, turns into a greedy devil when he comes to know that tons of gold lies underneath the land of Shrirangpur.

Baji is a rare example of a close to three hour movie that doesn’t force you to look at the clock even once. As far as the first half is concerned, the fascinating and intriguing storyline, creative narration and Mahajan’s mature handling of the subject leave you super-impressed! The shadow fighting sequence is a sheer pleasure and it deserves special mention. At this point itself you realize the film is an achievement for Marathi cinema. 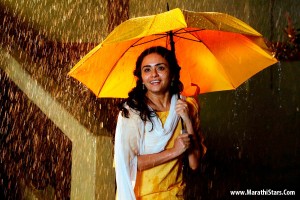 But alas, things aren’t so similar in the second half. Although it continues to be a well-shot entertaining affair till the end, it is the twist that plays spoilsport. After such an out-of-the-box first half, you really don’t expect the story to tread on the age old, tried-and-tested formula lines, but this is exactly what happens. In fact, the basic plot is almost the same as that of a Marathi film released not-so-long-ago, which itself was a mish-mash of a number of Hindi films.

Vasu Rane’s camerawork plays a large role in making Baji look like an international product. Be in the picturesque locales of Konkan or the high octane action sequences, he excels throughout. The background score and editing also make sure the final product turns out to be technically impressive. Atif Afzal joins the party too with well composed tracks, from which the title song is the best of all.

The film will also be remembered for its action and stunts, especially the train sequence. However, the use of a huge hammer to beat up could have been avoided. Such visuals can’t be digested by a large section of the audience since the film is aimed at people of all age groups.

Coming to the performances, this film required Shreyas Talpade to give his best performance till date and he does that. This act also adds on to his versatility since he manages to excel even in this genre. Jitendra Joshi matches up to him with an excellent, powerful villainous act. This will surely be one of his most talked about act always.

Baji is an entertainer worth your time and money. It also ensures Nikhil Mahajan to be a lookout for the future. With the tremendous hype and its commercial nature, it is most likely to be a box office success.