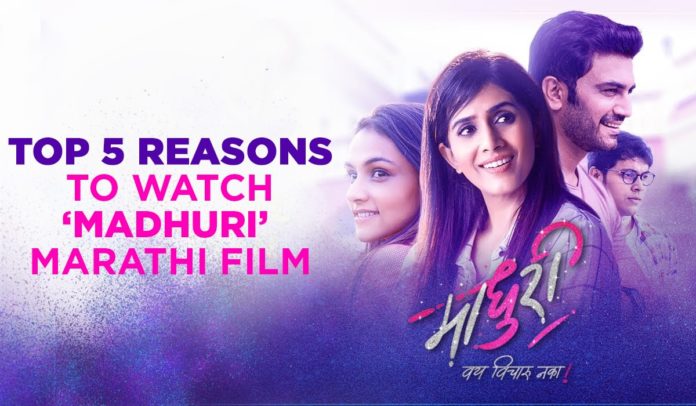 The much-awaited Urmila Matondkar produced first Marathi film ‘Madhuri‘ starring the evergreen Marathi Star Sonali Kulkarni is releasing in theatres this Friday on 30th November! While we are aware that you’ve already made your plans to watch the film first day first show, but for those who are yet to plan it we are presenting 5 reasons to watch ‘Madhuri’ in theatres!

Very few actors in Marathi are as versatile as Sonali Kulkarni. Over the years in her career, she has constantly played a variety of roles & has regularly reinvented herself as an actor. With ‘Madhuri’ she seems to explore the funky humorous side of her. Her role of a strict professor suddenly being changed to a 20-year-old seems certainly tempting to her fans.

Swapna Waghmare Joshi in very less time has made so many different kinds of films & they have been loved by the audiences. She is one of the few female directors working in the film industry. And this time ‘Madhuri’ is even more special as the film explores the world of a woman from a very unique perspective at two different mental states when she is an adult & when she is a twenty-year-old!

Along with Sonali Kulkarni in the lead ‘Madhuri’ also stars the dashing actor Sharad Kelkar & debutant actress Sanhita Joshi daughter of director Swapna Waghmare Joshi along with young actors Akshay Kelkar & Virajas Kulkarni. The film has a blend of experienced actors & youngsters giving us the treat to watch them perform.

The basic one-liner of a film itself is very exciting that a middle-aged woman suddenly starts behaving like a twenty-year-old & her daughter is baffled by it! But beyond the entertainment factor in it, the film explores the subject of mental illness & how it is necessary to be treated by a psychiatrist in such cases!

This film is officially produced by Mohsin Akhatar who is the husband of our favorite Bollywood actress Urmila Matondkar whom we grew up watching! After so many years she is entering into Marathi cinema then it has to be special! While we are still waiting to watch her as an actress in a Marathi film, her association with a Marathi film as a producer too is no small thing for her fans!