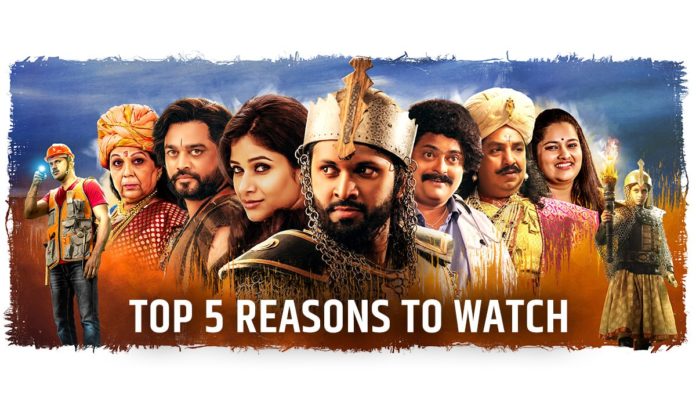 Starring popular actors like Rohini Hattangadi, Bharat Ganeshpure, Sushant Shelar, Purnima Talvalkar and Chef turned actor Vishnu Manohar along with a young & talented lead pair of Ashutosh Patki & Dhanashree Dalvi, ‘Once More‘ is one of a kind historical fantasy that is all set to hit theatres this Friday! We list down top 5 Reasons to justify why it’s a must watch!

Many a times we have seen either the hero or the heroine playing double roles in a film. But in ‘Once More’ many actors in the star cast are going to be seen in double roles! One based in the present reality and the other based in the historical fantasy!

From Hollywood to Bollywood Rohini Hattangadi has featured in all kinds of films and all kinds of roles! But now at this stage of her career it’s a Marathi film that has given her another challenging role! She will be playing a man in one of her double roles! Heavy use of prosthetic make-up and vfx has been used to make her appear completely like a man! Once More’s biggest usp is this performance for sure!

We have seen a few historical films and serials in recent times but a combination of historical and fantasy is rare! Hence ‘Once More’ promises to give fresh entertainment to the Marathi audiences that always look out for something new & exciting!

At the core of the film is a very twisted and unique love story! A love story in which the couple fights more than they love! Many a times a husband and wife are called as enemies of their last birth in fun! This film literalizes the idea and makes it seem interesting!

Visual effects or VFX has never really been used extensively in Marathi films. But ‘Once More’ promises to be an exception! Th director of the film Naresh Mahadeo Bidkar has been inspired by many VFX heavy Hollywood films and has worked hard to get the same quality in Marathi cinema! The audiences should definitely savor these high quality VFX in theatres only!