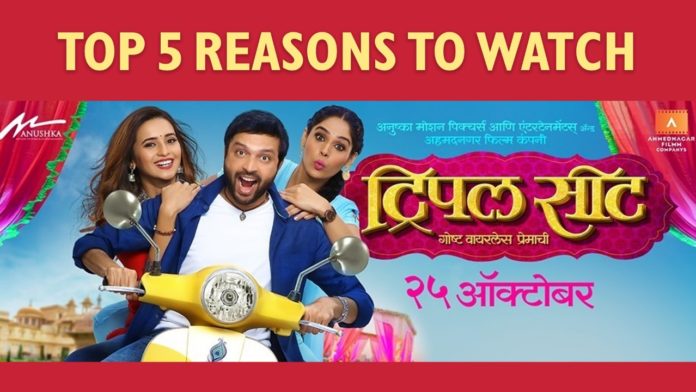 Ankush Chaudhari’s highly awaited masala entertainer ‘Triple Seat‘ is all set to hit theatres this Friday and is the big Diwali release for Marathi cinema lovers. We are listing 5 top reasons to not miss this film in theatres even when you have to travel ‘Triple Seat’ to the theatres!

We are all aware that certain artists like say Aamir Khan or Irrfan Khan are known for being very choosy about their films. In his own way Ankush Chaudhari is no different than these gentlemen! He maintains his exclusiveness towards the cinema medium and chooses very few films but those films thoroughly entertain the audiences.

Along with Ankush the film stars two young and talented actresses who haven’t been paired opposite Ankush before. Shivani Surve and Pallavi Patil both seem to have a great chemistry with Ankush and the audiences would be treated with a refreshing new love triangle between these three actors.

3. The Blend of Many Genres Together

The trailer of ‘Triple Seat’ showcases so much diversity and variety in content that is very rare to see all these things in one film. There is romance, there is a comedy of errors and confusions, there is a thriller and there is good old dramatic quality to the film. It’s like the audiences will be treated with 3-4 different films at the cost of one film! What is more ‘Paisa Vasool’ than that?

Many recent Marathi hit films have had some under the belt and bold humour and stories. While there is nothing wrong with it and there’s a group of audiences who watch such films. But the Marathi family audience are truly missing a good clean family entertainer that can bring the whole family together! And ‘Triple Seat’ promises to be just that!

5. Must Watch for Shivani Surve Fans

Shivani Surve has been a tv star for long but it was the recent reality show ‘Bigg Boss’ that made her an audience favorite. People have simply adored her straightforward and ‘bindass’ attitude and they are surely excited to watch her on the big screen. Interestingly jer character in ‘Triple Seat’ seems very opposite of her image among the fans and hence it will be even be enjoyable for the audiences.