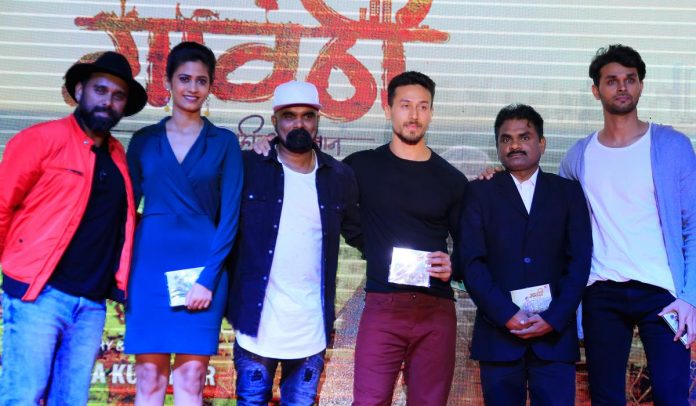 We have seen quite a few Hindi stars in recent times promoting their films on platforms of Marathi entertainment. But actor & dancer Tiger Shroff has done something out of the ordinary! He was recently seen promoting a Marathi film ‘Gavthi – Apman Nahi Abhiman’ at an exclusive song launch & trailer launch event for the film. Interestingly Tiger’s own film ‘Baaghi 2’ is set to release on the same date as ‘Gavthi’ & that is 30th March!

Then why would a star like Tiger promote a Marathi film that will be releasing on the same day as his film? Well because Tiger is a true friend! ‘Gavthi’ is directed by choreographer turned filmmaker Anand (Anddy) who has worked with Tiger for many films & is a good friend of Tiger. Tiger even considers Anddy as his ‘guru’ & at the event he also said that he has learned many things from Anddy! Another popular bollywood choreographer ‘Bosco’ was present at the launch event! Bosco too felt that ‘Gavthi’ would be a good film as ‘Anddy’ has great sense of timing as a choreographer & as a storyteller.

who is baaghi 2 bosco,