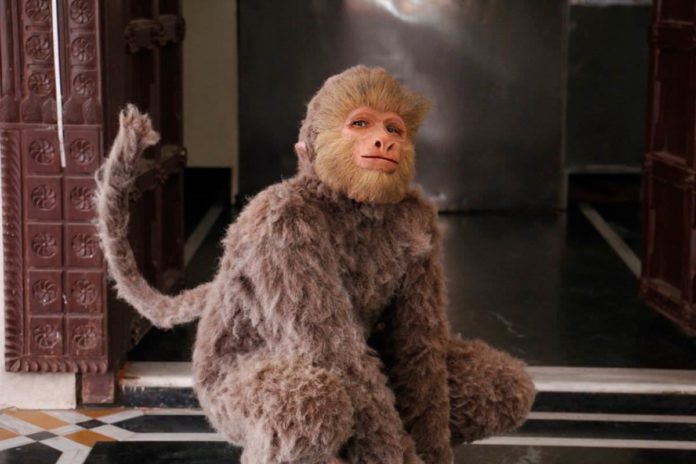 On the occasion of Hanuman Jayanti, a monkey suddenly out of nowhere landed at Bansidhar Hanuman Mandir, Pokhran-Thane. To everyone’s shock that monkey took blessings from Hanuman’s idol. Slowly a lot of crowd especially kids gathered at the temple to witness this unusual miracle. That monkey joined the crowd & the crowd started praying to it!

Suddenly the monkey stood straight like a human & started speaking too! The crowd was bewildered but then they realized it was in fact a child disguised as a monkey!

That child was a child artist & the occasion was the promotion of one of a kind upcoming Marathi children film ‘Monkey-Baat’. Written & directed by Viju Mane this unique Monkey get up was designed by popular make-up artist from Bollywood, Vidyadhar Bhatte! He has worked on films like ‘Parineeta’, ‘Rab Ne Bana Di Jodi’, ‘Lage Raho Munna Bhai’, ‘English Vinglish’ & many more.

Vidyadhar Bhate says that the reason this get up looked so realistic is because of ‘silicon’ mask which feels very much like natural skin & the artist wearing the get up can easily breathe inside it, so during the shoot the actors didn’t have to suffer one bit!

This film is set to release in this summer vacation from 18th May so that all the Chillar Party can enjoy it in theatres!