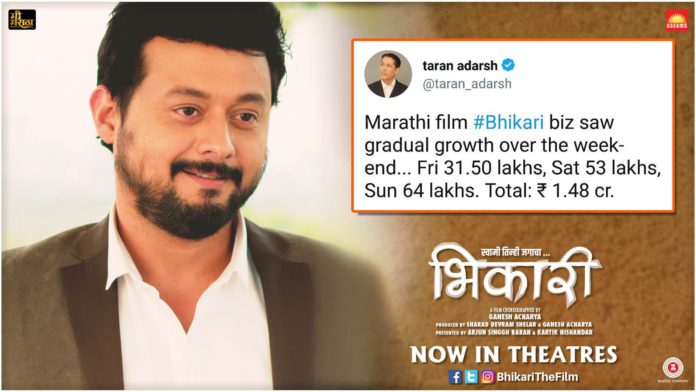 2017 has been difficult year for Marathi cinema. But every now & then Marathi audiences display their love on a very few Marathi films. Ganesh Acharya’s Marathi debut as director ‘Bhikari’ starring the most loved Marathi star Swwapnil Joshi has been loved by our audiences!

In mere three days ‘Bhikari’ has collected around 1.48 Crores on the box-office all over Maharashtra. On Friday the collections where 31.50 lakhs, Saturday 53 lakhs & on Sunday the film collected 64 lakhs. The film is an official remake of a hit Tamil film & seems like the makers of ‘Bhikari’ & Swwapnil Joshi have succeeded in making this film with a Marathi soul that could connect to the Marathi audiences.

The film also stars debutant actress Rucha Inamdar, Sayyaji Shinde, Guru Thakur & Milind Shinde. Ever since the film was announced all Swwapnil Joshi fans were excited to watch Swwapnil in a never seen before avatar of a ‘Bhikari’. The music of the film too has clicked with the audiences & is equally popular as the film.