Recently a new poster of upcoming Marathi gangster film ‘Rajan’ was launched on social networking sites. Presented by VR Movies & directed by Bharat Sunanda ‘Rajan’ would be the one of a kind crime genre film in Marathi. Popular Hindi & Marathi actor Raqesh Bapat will essay the title role of ‘Rajan’ in this film.

Raqesh is all set to change his chocolate boy image to an angry young man image with ‘Rajan’. The new poster reveals his look from the film & it looks like he fits the part perfectly. This film is based on the crime reality of Mumbai in 1993. 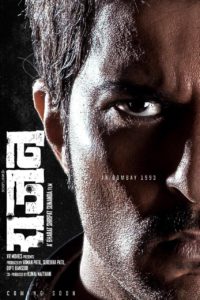 Though the title of the film is ‘Rajan’, this film is not based on any one individual. The film’s main motto is to entertain the audiences. This film presents Mumbai’s ‘Chawl’ culture of those times & has beautifully designed a love story around it. This film is produced by Waman Patil, Surekha Patil & Deepti Bansode while Kunal Naithani is the co-producer of the film. By the end of the year ‘Rajan’ will be releasing in theaters.