Zabardast fame actor & dancer Pushkar Jog who once was the leading hero of Marathi is back in action with his upcoming movie ‘Ti and Ti’. The movie recently launched its teaser poster in which he is looking totally clueless and stuck between two beautiful ladies making us curious about the plot.

The film stars Pushkar Jog, Sonalee Kulkarni and Prarthana Behere making us wonder if it’s going to be a love triangle. A major portion of this film has been shot in London & hence it is one of the rare Marathi films set in a western city like London!

‘Ti and Ti’ is produced by Goosebump Entertainment (Pushkar Jog) & Hyperbees Media (Mohan Naddar) and co- produced by Mohit Chhabra. Let’s hope the popular ‘Rom Com’ genre gets a new life in Marathi with this film. 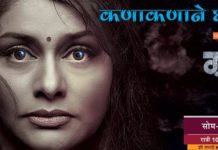