Recently Priyanka Chopra’s ‘Baywatch’ released all over the world but her love for the Marathi Manoos & our cinema is still just as fresh as it was previously! After the super success of her debut Marathi production ‘Ventilator’ under Purple Pebble Pictures banner her second Marathi film is soon releasing!

‘Kaay Re Rascalaa’ is a family entertainer with a south Indian flavour to it. Directed by I. Giridharan Swamy, this film marks the debut of Gaurav Ghatnekar and Bhagyashree Mote. The cast also includes Nikhil Ratnaparkhi, Supriya Pathare and Akshay Kothari.
The music is composed by the same duo Rohan-Rohan who composed beautiful songs for ‘Ventilator’! 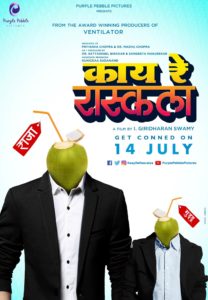 Priyanka Chopra has set a great example for all International stars & actors as she hasn’t forgotten her motherland even after being popular in Hollywood! Along with Priyanka many other Bollywood stars & producers have showed interest in Marathi Cinema which proves the X-Factor in our films & the subject of our films!

Along with Priyanka Chopra her mother, Dr. Madhu Chopra has produced ‘Kaay Re Rascalaa’. Kunickaa Sadanand is the Associate Producer, while Dr. Satyasheel Biradar and Sangeeta Manjrekar are the co-producers of the film. Kaay Re Rascalaa is set to release on the 14thof July, 2017.