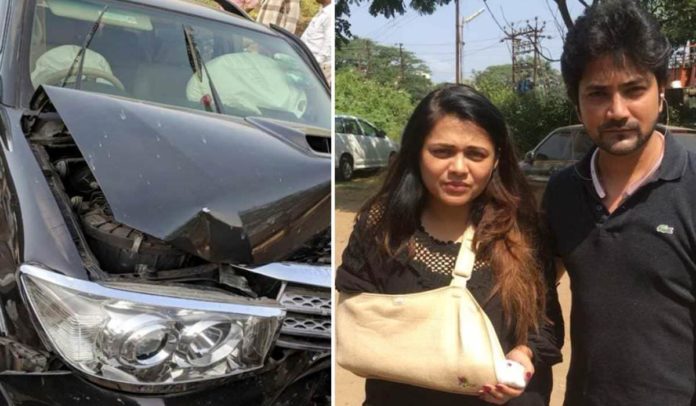 Popular Marathi actress Prarthana Behere & actor Aniket Vishwasrao unfortunately met with an accident near Lonavla. They were traveling from Mumbai to Kolhapur for promoting their upcoming film. However the good news is that both Prarthana & Aniket are safe & nothing major happened to them. Though Prarthana has minor injuries & her hand is fractured.

They were traveling to Kolhapur for promoting their upcoming Marathi film ‘Maska‘, directed by Priyadarshan Jadhav & which also stars Chinmay Mandlekar & Shashank Shende among others. Prarthana’s driver was driving the car while Aniket Vishwasrao was sitting in the front. When the accident happened Aniket was in sleep & hence couldn;t understand exactly what happened!

In the back Prarthana was accompanied by her assistant Swati. They were traveling on the Mumbai-Pune Expressway which is now getting day by day dangerous for travelers. Before as well artists who have to frequently travel through this highway have met by life threatening accidents. The police are now enquiring about what exactly happened & how did the driver lost control of the car.