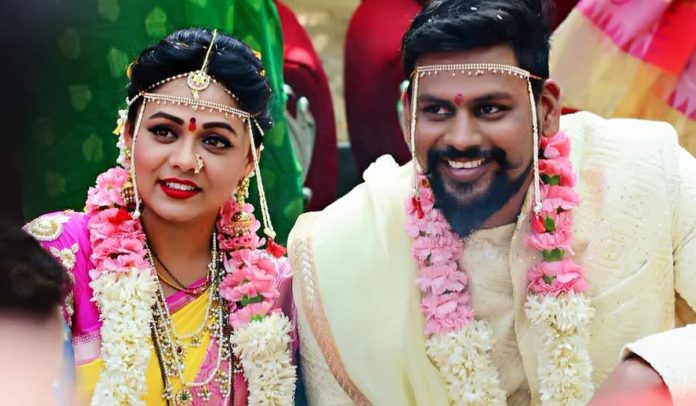 Prarthana Behere got married to director-writer Abhishek Javkar on 14th November in a destination wedding in Goa! Many of her actor friends were present on this occasion & they also clicked a huge selfie! Vaibhav Tatwawadi, Virajas Kulkarni, Aaroh Welankar, Sonalee Kulkarni, Priya Marathe & many others can be seen in these photos.

Prarthana’s has got married in the traditional arrange marriage way! She met director-writer Abhishek Javkar while she was shooting her upcoming film ‘Whatsapp Lagna’ along side Vaibhav Tatwawadi. Prarthana’s another upcoming film is the Ajay Naik directorial ‘Hostel Days’ in which she paired opposite Aaroh Welankar (of Rege Fame) & Virajas Kulkarni (son of actress Mrunal Kulkarni). They too were present on this occasion.

Prarthana Behere has earned a respectful place among the contemporary actresses in Marathi cinema. She started with a Hindi serial ‘Pavitra Rishta’ & then went on to earn lots of appreciation accolades for her work in films like ‘Coffee Ani Barach Kahi’, ‘Mitwa’ & ‘Fugey’. We wish Prarthana & her groom writer director Abhishek Javkar all the very best for their future together!